Ruben is Fred, a wannabe-writer who decides to spend some time in a remote cabin to kickstart his writing endeavours. In a nearby cabin is Fanny (Aya Cash), a writer who has already had no small amount of success. A power outage leads to these two people coming together, and Fanny comes up with the idea of them telling stories to one another, attempting to provide entertainment and scares.

An anthology movie with a twist, Scare Me has gone down well with some horror fans, and I really can't work out how that happened. It failed almost entirely for me, and is only saved by the wonderful turn from Cash.

Although the idea of the main characters telling, and acting out, their tales initially seems like a fun concept, with physical performances being complemented by some wonderful audio/foley work, it quickly outstays its welcome, especially when you realise that you're never going to see more. It then starts to make you wonder why this wasn't simply created as a stage play, or perhaps even some kind of immersive audio-only experience, which could have been fantastic.

Ruben isn't as good as he needs to be in his role, and he doesn't really sell any of the subtler characterisations that bubble up to the surface in time for the third act. Cash is much better, but there are instances when her acting feels as if it is working hard to underline the fact that she is acting, if you know what I mean. Chris Redd, playing a pizza delivery worker named Carlo, brings a fun energy to the proceedings, but it isn't enough to elevate the whole movie.

Of the many problems I have with this movie, the one that may be the most difficult for me to ignore is the fact that almost none of the stories delivered by the performers is remotely scary, or even very good. They are, in fact, mostly forgettable. The joy with an anthology film is that you usually don't have to wait too long to find a story you like, but Scare Me leaves viewers without any proper entertainment to go with the novel presentation.

I really wanted to enjoy this. I'd heard about the format and thought it could be a good way to deliver some traditional fare in a non-traditional way. If nothing else, it featured two people telling spooky stories by a fire on a dark night. Except it didn't. Just that simple concept would have been preferable to this (as happened with the wonderful little gem, The Devil's Business).

Misguided rather than absolutely inept and horrible, Scare Me just felt a lot more annoying and intolerable to me because Ruben never focused on the strengths available to him. Maybe one of his future projects will be better though, and I'm not writing him off. This was certainly a different way to try to make something with certain limitations in place. 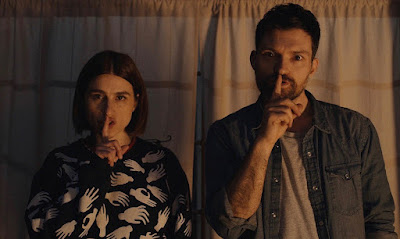