Gentrification. It isn’t always a completely bad thing, especially when certain areas are rejuvenated and re-energised in a way that helps out local residents. But it is often done in a way with little, or no, regard for the people already living in an area that is about to be changed beyond all recognition. So that isn’t a good thing. Neither are vampires.

Vampires vs. The Bronx is a film that throws both of these things together in a wonderfully entertaining kid-centric horror that effortlessly feels much more in line with ‘80s flicks than so many other modern films that have tried, and failed, to capture that essence.

Jaden Michael is Miguel, Gerald Jones III is Bobby, and Gregory Diaz IV is Luis, and these three Bronx kids are the ones who discover that vampires are buying up local real estate and planning to snack their way through the Bronx. The vampires are being helped by Frank Polidori (Shea Wigham), and their business front uses the name Murnau to give those in the know fair warning. Can the kids get anyone to believe them? Can they save the neighbourhood, from both gentrification and the vampire menace? And how much will they be able to take away from watching Blade?

Directed by Osmany Rodriguez, who also came up with the story that was developed into the screenplay by Blaise Hemingway, this is one of the most pleasant surprised I have had in months. Admittedly, the trailer piqued my interest, but this benefits from perfect lead performances, pacing and plot progression that only falter in the third act (which may be enough to turn some viewers against it, but it still worked for me), and a real sense of fun throughout.

Not looking to reinvent the wheel, or familiar vampire movie tropes, this is a film that gives you a checklist of things to look out for . The use of holy water, the suspected vampire who isn’t one, the improvised stake, and much more. You have seen everything here before, but that is only a problem if none of it is done well here. On the contrary, it is all handled with gusto, even if some may consider it a little bit bloodless.

I won’t go on and on about how great the young leads are, but they are, so I will take a moment to mention how good Whigham is in his role, how much fun Sarah Gadon has as Vivian, a newcomer to the area that the kids want to keep safe, and how nicely the cast is rounded out by the likes of Method Man, Chris Redd, The Kid Mero, Judy Marte, and even Zoe Saldana (in a fantastic cameo).

It may not be destined for status as an enduring classic, it may not be as scary as you want it to be, and there are moments of silliness that stretch plausibility (why do people always end up hunting vampires at night?!?!?), but Vampires vs. The Bronx is a perfect film to enjoy in the right company, especially during October. 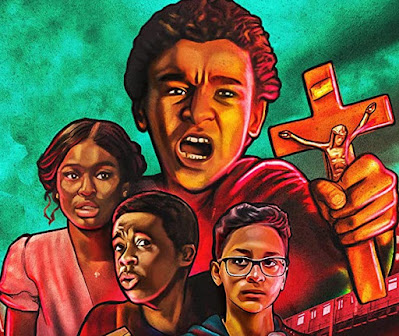