The first Deep Blue Sea movie remains one of my favourite shark movies of all time. Despite some glaring issues, and any shark movie has to do a lot to swim out from underneath the mighty shadow of Jaws, it's a fantastic mix of fun, thrills, and spectacle. And I never thought it would be the start of a movie series, but here we are. Deep Blue Sea 2, on the other hands, was one of the worst sequels I have ever seen. And I have seen pretty much every major horror franchise instalment (and ALL of the Puppet Master movies).
I wasn't too enthusiastic about checking out this third shark-infested outing. Writer Dirk Blackman has few credits to his name, with the biggest being arguably the worst of the Underworld movies, and director John Pogue didn't really impress me with his helming of The Quiet Ones (one of only four movies he has directed, although he has also written a number of fun screenplays, if you can define The Skulls movies as fun, which I can).
Tania Raymonde plays Emma Collins, a marine biologist studying the effects of climate change on a small atoll that is sinking further into the sea, and is no longer inhabited by more than a handful of people (most of them being part of the science team). Things get interesting when Richard (Nathaniel Buzolic) and Lucas (Bren Foster) turn up, looking for some very aggressive bull sharks that they believe have made a beeline for the atoll. Richard and Emma have some history, whereas Lucas has no such ties. He has the men under his command, and won't think twice about using some of the weaponry and hardware that could cause as much damage to the atoll as it could to the sharks.
While the second Deep Blue Sea movie felt like some low-budget parody of the first, this feels like a fun retread that is happy to sculpt some different meat on to the bones (no, don't ask me why I went with that bizarre and gross metaphor). The sharks are still motivated by certain factors, and the sinking atoll makes for an interesting environment in which to place all the action. And speaking of action, it's so much better this time around than it was in the second film. The effects are decent, the pacing isn't too bad, and the overall effect is to turn Deep Blue Sea into a name I now wouldn't mind being stretched out for a number of tenuously-connected sequels.
Raymonde is a decent lead, Buzolic and Foster are both suitably shady in different ways, and the other standout is Emerson Brooks, playing the toughest member of the science team, and the main hope for leading a fight back if/when things turn messy.
It certainly still feels weighed down by the limited budget and resources, but Deep Blue Sea 3 puts a lot more action and enjoyable shark moments onscreen than you'd expect, especially if you endured the previous outing. It's no classic, still not anywhere close to being as good as the first movie, but it's not a bad way to pass 90 minutes or so.
6/10
https://ko-fi.com/kevinmatthews 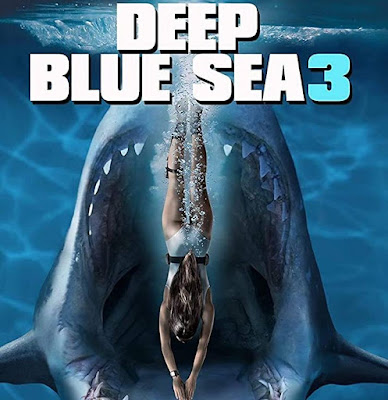