Writer-director Nicholas Verso has crafted quite the little gem here, and my biggest worry is that it will be marketed as a horror movie to horror fans who won't quite appreciate the mix of teen angst and fantastical elements. Not that horror fans aren't often an inclusive and accepting crowd, but rather some films are sold in such a way that expectations are created/raised, without a note about the film sitting within the horror genre without really being a more straightforward horror. It happens quite a lot, which is why I often try to note it in reviews, hoping that I can recommend something I liked a lot without misrepresenting it to others.
The film is all about Corey (Toby Wallace) and Jonah (Gulliver McGrath), two teens who are now moving in very different circles after they spent so much time being firm friends. Corey now hangs about with Jango (Justin Holborow) and his little gang, while Jonah is a bit of an outcast, and often the victim of bullying from Jango and co. Corey is also now starting to view himself differently as he considers how he appears to Romany (Mitzi Ruhlmann), a young woman he is interested in. Anyway, events conspire to bring Corey and Jonah together for a walk homeward on Halloween, 1997. Jonah starts to tell some spooky tales, but the scariest thing in the night may be the perils of growing up under the constant weight of peer pressure.
Clocking in with a runtime of just under two hours, Boys In The Trees is a film not rushing viewers towards any kind of spectacular finale. In fact, if you don't predict at least one major moment here then you haven't watched many horror movies at all. It is, to use a cliché, more about the journey than the destination. But that journey is an almost perfect to enjoy on a dark night in October.
There are things that Verso gets wrong, especially when it comes to some of the dialogue scattered throughout the script, but they are all easy to forgive when he gets so much right. The tone throughout, whether it's the mid-to-late '90s vibe, and soundtrack, or the crisp and chilly darkness of an outdoor walk on Halloween, is perfect. The cast, and their performances, all work brilliantly, and help to make it easier to accept the uneven way in which things are weighted, in terms of emotional impact. You also get occasional individual moments that showcase the blending of reality/memories with strange characters and shadows that feel a bit too lively. More of those moments would have been welcome, but the way they come and go emphasise the push and pull between the two leads, one being more reluctant to look back at the past and remember the sense of magic than the other.
Wallace and McGrath work well together, feeling more like brothers at times than friends (which is absolutely in line with how best friends do feel), and they're even good enough to make the sillier lines in the script still feel acceptable. Holborow does what he can with his character, but his actions make him impossible to like whenever he's onscreen. If there's one major flaw, it's that Jango is so constant and forceful in his bullying that you find it harder and harder to believe that Corey would have ever fallen in with him and his crowd. Ruhlmann does good work, and her character feels very much like the kind of young woman who could be both cool enough and also more mature to make some teenage wannabe-Romeo want to change the error of his ways.
Weaving between dreams and nightmares, both real and imagined, Boys In The Trees is a wonderful concoction that taps right into memories many of us will have, even if we've buried them deep in the recesses of our minds. It's well worth your time, and emanates that special Halloween atmosphere from almost every night-time scene.
8/10
https://ko-fi.com/kevinmatthews 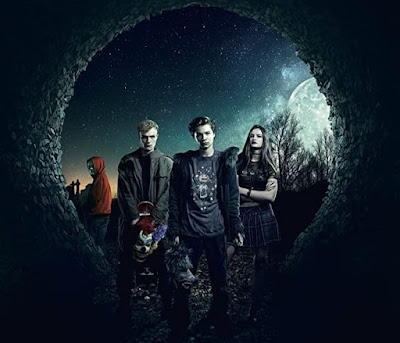