Directed by Amy Holden Jones and written by Rita Mae Brown, The Slumber Party Massacre is all about, well, I guess the title tells you all you need to know.

Trish (Michele Michaels) is the girl throwing the titular party. She did invite new girl, Valerie (Robin Stille), but Valerie decided not to accept the invite after hearing Trish and her friends making fun of her. She ends up babysitting her sister, Courtney (Jennifer Meyers), instead. But everyone will end up sharing the terrifying experience, surely, or they wouldn’t all be introduced in a slasher movie.

Originally intended to be a parody of slasher movies, Slumber Party Massacre ended up being a more straightforward horror, but nowhere near as straightforward as most. The script from Brown certainly feels more self-aware and playful than many other slasher movie scripts from this time, and the direction from Jones keeps the emphasis on the silliness of the main premise and the light atmosphere of a fun slumber party. The girls chat away to one another, boys decide to show up and try their luck, pizza and beers are to be consumed, and everything feels surprisingly convincing, for this kind of film.

The cast aren’t that memorable, but that isn’t necessarily a bad thing as it means nobody is all that awful either. Michaels is the one setting up the main premise, Stille is someone you always know has the potential to be final girl material (unless she's killed off in a major surprise move), and Meyers is a lot of fun as the typical younger sister who wants to be allowed to do more. Michael Villela is a lot of fun as the killer, Ryan Kennedy is amusing as the "cool" adult neighbour, Mr. Contant, and the always-welcome Brinke Stevens is as welcome as always, in the role of Linda.

A lot of people prefer the daffy sequel to this first instalment. I sit on the other side of that fence. This feels like a really fun time, but without ever sacrificing the small moments of tension and the standard template for slasher movies. As Rick Astley might say, and I paraphrase, "it knows the rules, and so do I". It may not do anything perfectly, but it does everything well. I actually rate this quite highly in any selection of slasher flicks from the 1980s. I hope others agree. 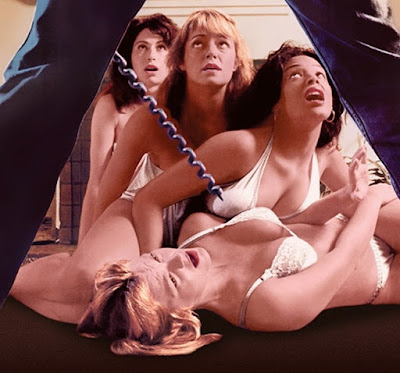