Okay, you're best not to go into Let's Scare Julie looking forward to something presented in what is supposed to look like one long take. It doesn't manage to keep that up, which wouldn't be so bad if the edits didn't feel so unnecessary, as if someone had just forgotten it was supposed to be a gimmick used to sell the movie. You're also best not to go into Let's Scare Julie if you're looking forward to a superior horror movie. It is not. I have seen some people praise this, and it is one of those instances when I start to worry that I have somehow seen some completely different movie from them.

The plot involves a group of girls having a sleepover, kind of. They seem to be fairly typical teenagers, in the way they don't care too much about the repercussions of teasing one another and plotting against others outwith their group. That leads to them heading across the road, to play a prank on a reclusive young woman named Julie. Emma (Troy Leigh-Anne Johnson) stays behind though, looking after her little sister, Lilly (Dakota Baccelli). The prank doesn't go according to plan, which puts everyone in danger. Including Emma and Lilly.

There's a point near the start of Let's Scare Julie when you may get your hopes up that it has something interesting to say. Something that makes the grating performances and faux-gimmickry worthwhile. The girls are teasing Emma, and the dynamic seems to fluctuate between jokey camaraderie and a real streak of meanness. The prank at the heart of the movie is something that provides potential relief for Emma, a standard case of one victim having a breather while tormenters move on another victim. But these are Emma's friends, so the way they have been teasing her cannot be that bad. Can it?

Never mind though, the film doesn't stray too far down that path. Instead, writer-director Jud Cremata simply presents a horror film with too few scares, too little to care about, and too many moments that underline just how carelessly everything is thrown together. The most obvious example is the way in which the girls are jumping about and giggling one moment, telling each other they need to be very quiet as they sneak around the house the next, and then shrieking and making more noise later. It's incredibly insulting to viewers, and cannot be dismissed by shrugging and saying "black magic".

I don't want to be too rude to the young cast, which is why I am not naming more of the characters, or the actresses playing them (as this is almost an all-female cast), but it's worth mentioning that both Johnson and Baccelli are easily the best performers onscreen. Baccelli is also the youngest, so that may give you an idea of how I rated the others.

I struggle to think what Cremata was actually aiming for here. If he wanted to give viewers one of the more painful horror movies in recent years (not counting the million movies with the name Amityville or Krampus shoehorned into the title) then he succeeded. If the aim was something a bit different, and still scary, then he failed. Miserably. I could go on and on about every single thing that caused me annoyance, but that would end up being the kind of hyperbolic review I try to avoid. I just hope that some people trust me when I advise that this is absolutely not worth your time, unless you have to choose between this and some dross called The Amityville Krampus. 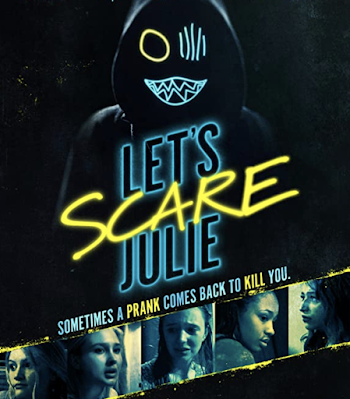