The trailer is infamous, and the film actually manages to live up to that level of excitement, but there are still not enough people who have experienced the full glory of Shakma for themselves. If you are within that demographic, you should really change that.

Shakma is a vicious baboon. He's made even more vicious after being administered a drug that is supposed to calm him down, but ends up having the exact opposite effect. This means that Shakma is an added menace when a medical professor (Roddy McDowall) and a bunch of his students are all playing a live action role playing game in their research facility building. The building is all set up for their game, people speak to one another on various walkie talkies, and Shakma starts to cause carnage and death before the players start to figure out what is going on.

Written by Roger Engle, his only credit, and co-directed by Hugh Parks and Tom Logan, Shakma has the potential to be absolutely awful, considering the silliness of certain plot elements. It ends up being quite thrilling, however, because of how dangerous it feels throughout. A lot of editing and canny camerawork is involved to show the baboon being vicious and violent, but there are still many moments that have you fearing for the cast members.

Speaking of the cast members, McDowall is the biggest name here, but it's obvious that he's been picked for a prime role that allows him to lend his wonderful presence to the film without getting overly involved with the more intense sequences that will involve some of the younger players. Christopher Atkins is the lead, even if that only becomes clear after the opening third is out of the way, and he is joined by Amanda Wyss, Ari Meyers, Robb Morris, Tre Laughlin, and a few others.

But it's Shakma who holds your interest most, especially during the many moments that depict him going absolutely mental at closed doors. Shakma does not like having his routes blocked by doors, that much is clear. He's terrifying for every minute he's onscreen, even when not supposed to be as terrifying as he is later. I would not want to be stuck anywhere with an angry baboon, and Shakma seems to be about the angriest baboon I have seen in my life.

Things are set up well enough, with the measures taken to allow the gamers to play their strange game in peace, and there are logical reasons for most of the major plot beats, making this a more grounded and coherent piece of work than you'd think it would be. I am sure it would have been easy enough for people to be lazy and shrug, "some people are in a building and a baboon goes on the rampage", but kudos to the creators for putting some thought into things, making it a more believable, and slightly darker, film.

Watch it, be thrilled by it, and watch it again. Oh, and definitely head to YouTube to check out the trailer. Shakma! 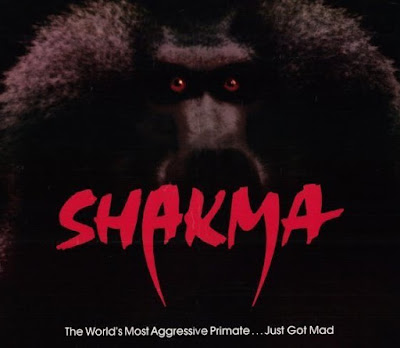