I was not won over when I saw the trailer for The Witches, a remake of the 1990 Nicolas Roeg film, one of the most legendarily-terrifying movies aimed at kids, adapted from the book by Roald Dahl. It looked as if it had been completely sanitised, and the choice of Anne Hathaway as the main villain seemed like a bit of miscasting.
Well, while it's worth bearing in mind that it has been many years since I last saw the original movie, this ended up being a decent remake/re-adaptation. The biggest problem it has is that it feels quite redundant. I don't recall anyone crying out for another version of the tale, and the film itself, while very competent, and enjoyable, just never gives you anything to make it more worthy of your time than the previous incarnation, which is now 30 years old.
Witches are everywhere. And they hate children. When our young hero (Jahzir Bruno), actually named Hero Boy, and his grandma (Octavia Spencer) head away for a break at a lovely hotel, they don't realise that their timing could not be worse. The hotel is also hosting a meeting for a number of witches, led by the Grand High Witch (Anne Hathaway). They have a plan for children, and that plan involves turning them into mice. All of them. Our young hero gets caught overhearing this plan, so is immediately mouse-ified, alongside a young man named Bruno Jenkins (Codie-Lei Eastick). Accompanied by a surprise ally, the mice must reach grandma, tell her what is going on, and find out if there's a way to reverse the effects of the potion.
Directed by Robert Zemeckis, who also co-wrote the screenplay with Kenya Barris and Guillermo del Toro, The Witches gets a number of important things right. It keeps things quite scary, especially for younger viewers (parents may want to either check this over beforehand or be prepared for extra-tight cuddles while watching). It transfers the action to 1960s America without losing anything vital to the overall tone or atmosphere. The cast are also a bonus. Bruno does well with his screentime, Spencer is a wonderful grandma, Stanley Tucci is excellent as the hotel manager, and Hathaway is clearly having a lot of fun in her role, complete with an undetermined accent and inability to comprehend people around her who don't give her immediate agreement and compliance. You also get an enjoyable voiceover from Chris Rock.
It's a shame that the main thing it gets wrong is something many can probably guess before even seeing one second of the film. Yes, with Robert Zemeckis at the helm you get an over-reliance on CGI, some of it nicely done and some of it that will make you yearn for some practical effects. I like the depiction of the witches when shown in their natural form (bald, with claws, no toes on their feet, and wide mouths with sharp teeth), but even that serves as a reminder of how great the practical effects were in the 1990 movie. And as for the CGI mice, let's not dwell on those. There's a pretty decent black cat that I was impressed by, and numerous enjoyable little touches here and there, but it's definitely a case of Mr. Zemeckis once again playing with some of his favourite new toys while some old dependables could have worked equally well.
So, unless my memory is blanking out one, we have had three movies in the past decade or so made from Roald Dahl books that had been filmed before. One was quite bad, one was quite good, and now this one sits almost squarely in the middle. I enjoyed it while it was on, but I won't rush to rewatch it, and am now more eager than ever to revisit the version that terrified me when I was young (and I wasn't even that young, being about 15-16 when it was released).
6/10
https://ko-fi.com/kevinmatthews 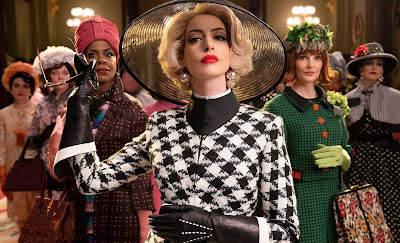