Very loosely based on a short story of the same name, by Oscar Wilde nonetheless, The Selfish Giant is the kind of working-class drama that us Brits can do so well, and it's a most impressive feature debut from writer-director Clio Barnard (who would do equally good work with her next film too, Dark River).

Conner Chapman is Arbor, a bit of a scally, to put it mildly, and his best friend is Swifty (Shaun Thomas). Both boys are out to make some cash, with Arbor the more desperate of the two, hoping to help his mother out of some bad debt. Bunking off school when they can, until they are suspended, the two boys spend their time trying to get Kitten (Sean Gilder) to give them a chance. He owns a local scrapyard, and won't question the legitimacy of their finds. But Arbor starts to push more and more, driven by the quest for a bigger payday.

Anchored by two child performances that are simply superb, The Selfish Giant is a film that you suspect from the very beginning isn't going to end well for everyone. Part of you may wait patiently to see Arbor get his comeuppance, but knowing that he drags Swifty along with him makes it always bittersweet when you suspect things are due to go wrong.

Barnard does a great job of getting the performances from her young leads that match the material without softening the edges. Arbor will make you angry at times, especially throughout most of the first half of the movie, but you get to see moments that clarify his motivation, making him a bit easier to warm to, in between his mood swings and tantrums. Swifty is easily led astray, but you can see a small ray of hope for him to change his life around, especially as he bonds with the large horse owned by Kitten.

Chapman and Thomas are both excellent in their roles, surrounded by a fine selection of reliable adult co-stars, including Gilder, Lorraine Ashbourne, Rebecca Manley, and fleeting appearances from Ralph Ineson, Ian Burfield, Steve Evets, and Siobhan Finneran.

The young leads may not create a fantasy world for themselves, certainly not in a way we usually see with children onscreen escaping reality, but they risk a similar lack of attachment to events around them as they start to reach further and higher for some kind of envisioned rope ladder that they see as a possible escape route from their daily lives. It's easy to believe in though, especially for those who have any experience of poverty and struggles. The more gravity tries to keep you pinned to the ground, the harder you work to believe in anything that may lift you up, whether that is using some of your money to buy lottery tickets or believing that anyone in the government will work hard to help change the circumstances that you've been surrounded by every day.

Not a fun watch, although there are moments of levity here and there, The Selfish Giant is definitely worthwhile. If you're unfamiliar with the struggle depicted here, perhaps just take a moment once the end credits roll to check up on the current stats in the UK regarding poverty, regional economic failures, and the many people who are stuck in a life that seems to be a million miles away from your own. 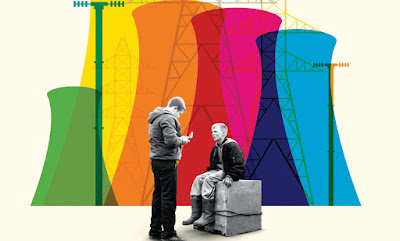