A remake of The Ghost Breakers, with the same director, and one of the same writers, behind the camera, Scared Stiff is a lot of fun, but only IF you can tolerate the whacky antics of Jerry Lewis, here doing his loud manchild schtick.

Lizabeth Scott plays  Mary, a woman who has just inherited a property on a small island near Cuba. That's all well and good, but the property is said to be highly haunted. Heading that way, she ends up joined by Larry Todd (Dean Martin) and his friend, Myron (Lewis). Todd is a nightclub singer who thinks he has shot a gangster. Myron seems to have no  main job role, other than to annoy his friend. Hijinks ensue.

I've always had a soft spot for Scared Stiff, having seen and enjoyed it before The Ghost Breakers, and I think it remains a great vehicle for Martin and Lewis. Their very first scenes play out in typical fashion, and the film premise allows them a good bit of room to play around (most notably in the amusing scene that has Lewis dressed up and miming to a Carmen Miranda song). Both the laughs and the spooky trappings are generally heightened here, compared to the 1940 movie, but it works well because the leads are equally bigger “personalities” than Hope and co.

Walter DeLeon doesn’t need to change too much of the core of his script, and I am not sure if the way the material is adapted for the stars falls to him or co-writer Herbert Baker, who had already worked with Martin and Lewis, but it’s nicely transposed to something the same as The Ghost Breakers . . . but different.

Marshall directs the material as well as he did previously, with the longer runtime reflecting the extra moments that allow Martin and Lewis to step aside from the main thrust of the plot to get up to some of their familiar antics.

Maybe a bit harder to recommend than the previous version of this film, because it depends more on how you feel about the leads (particularly Lewis), but Scared Stiff stands up as a spooky comedy that delivers a wonderful mix of haunted house tropes and chuckles in the third act. I still like it, I still rate it as one of the better Martin and Lewis pairings, and I still urge others to at least check it out. 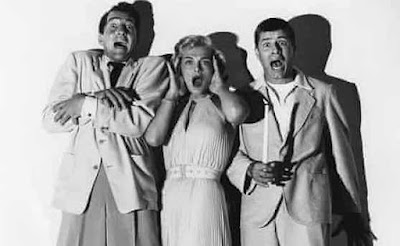