I may have lost count, but I am pretty sure this must be about the seventieth Hellraiser movie, and it is time for writer Gary J. Tunnicliffe to step up and direct, after doing such a sterling job of almost destroying the entire series with his work on the script for the previous outing.

Two detectives, who also both happen to be brothers, Sean Carter (Damon Carney) and David Carter (Randy Wayne), are investigating crimes committed by a deranged serial killer. They don't seem to realise that this is the work of Pinhead (played this time by Paul T. Taylor) and his main assistant here, The Auditor (played by Tunnicliffe). To try and help things along, the two male detectives are joined by a female, Christine Egerton (Alexandra Harris), and things start creeping towards an ending you can see coming a mile or two away.

I think (not completely sure though) that this is a Hellraiser movie written AS a Hellraiser movie (unlike so many instalments on the series that were just movies with Pinhead and cenobites shoehorned in). There are some times when it doesn’t feel Hellraiser-y enough, mainly because so much of the plot feels like a standard serial killer movie, but the horror aspects are very effective throughout.

The one thing I know for certain is that, perhaps due to such a low bar being set the last time around, this is a much better film than the last one. The plot is slim, although Tunnicliffe certainly tries his best to make it feel a bit weightier, and I will admit that there are a couple of really good ideas here, and the use of the demonic entities allows for some excellent set-pieces.

The cast are a mixed bunch. Carney and Wayne are a couple of poor leads, although Harris does a lot better, making the men more tolerable whenever she is sharing the screen with them. Tunnicliffe is enjoyable as The Auditor and Taylor is a worthy successor to Bradley as the most iconic of the cenobites. Having said that, he apparently tried to give a different interpretation of the character, yet it feels very much like he was playing things safe by trying to imitate the best person to forever be associated with the role. I can take or leave everyone else, although I think it is worth mentioning “the jury” as a highlight.

I am as surprised as anyone else might be to say that I quite enjoyed this. It works for fans of the series, and it also works as a fairly stand-alone horror flick. Tunnicliffe has almost done enough to make me forgive him for the previous Hellraiser movie he created. Almost. 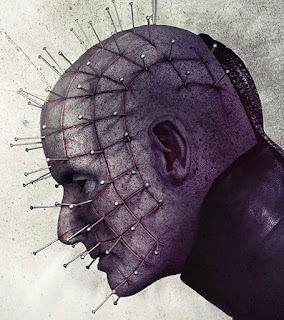