As happens with pretty much every Adam Sandler movie nowadays (every one that isn't directed by the Safdie brothers anyway), the trailer for Hubie Halloween was met with much eye-rolling and groans of despair. Everyone keeps assuming that his next project will be that deliberate attempt to make his worst ever movie after being snubbed by Mr. Oscar. This is, once again, not true. Although it may feel like it to some people.

Sandler is Hubie Dubois, a man devoted to helping the people of his hometown, Salem, and keeping them safe. And none of them really appreciate his work, or the impressive array of extras that he has fitted to his Thermos flask. Maybe that will change this year though, considering there's an escaped patient from a local institution, and a deadly presence that seems to be whisking away a number of residents. The people in trouble may not like Hubie Dubois, but that won't stop him from trying to save them. Which is why the lovely Violet Valentine finds him so attractive.

Directed by Steve Brill, and co-written by Sandler and Tim Herlihy, this is a typical Sandler joint in so many ways. The cast includes Kevin James, Rob Schneider, Steve Buscemi, and more familiar faces (and things start with a fun little gag involving Ben Stiller reprising a role from far in his past), this is a performance from Sandler that has him putting on an annoying voice, and the whole thing requires a suspension of disbelief that will be a lot harder for those who dislike the lead.

The cast all do well though, especially when not playing characters who are harder to believe (Julie Bowen suffers the most here, as her character is the one inexplicably attracted to Hubie). Noah Schnapp and Paris Berelc are Tommy and Megan, a young maybe-couple who help Hubie, and are in turn helped by him, and there are very fun turns from Tim Meadows, Maya Rudolph, June Squibb (playing Hubie's mother, and rocking a number of amusingly inappropriate t-shirts), Ray Liotta, Karan Brar, and Shaquille O'Neal. Everyone seems to be having a really good time, but not in the overly smug way that can emanate from films like the Grown Ups movies. In this case, those having a good time onscreen are also helping viewers to have just as good a time. Sandler is arguably the worst person in a main role, because of his penchant for silly voices, but his character is pitched almost at just the right level, firmly in between sweet and innocent and annoying as hell. This film won't win him any new fans, but I don't think he's been bothered about converting people for many years now.

Hubie Halloween is not the funniest film you'll see this year. It's not one of the best. It's not even the best thing that Netflix has delivered in time for seasonal entertainment on the run up to Halloween this year. But it IS a fun family film that actually does a great job of mixing some laughs with a surprisingly hefty dollop of spooky atmosphere. These are safe scares, and this is a safe film, but everyone deserves to enjoy some thrills and chills during October, and this is an attempt to provide a seasonal treat for everyone. 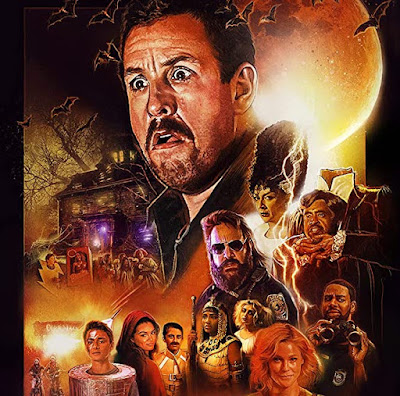