Written and directed by Phillip G. Carroll Jr., and starring his wife (Chloe Carroll) in a main role, The Honeymoon Phase is a fairly low-budget sci-fi horror that has an interesting idea at the heart of it, and then spoils that idea by throwing in some mishandled twists and turns.

Tom (Jim Schubin) and Eve (Carroll) are a couple who could do with some money to help them along in life. So they pretend to be married, which means they can enrol themselves in a scientific study of couples that seems to be aiming to find out just what makes "the honeymoon phase" so enjoyable, and how that feeling can endure throughout a long relationship. Things start off well enough, but soon change. Are Tom and Eve being manipulated by the people running the study, or are they just growing apart while forced to spend so much time together?

There's a lot to enjoy/admire here. Carroll Jr. has made good use of his budget, and wisely gone for a film that pushes ideas ahead of any attempts at spectacle and gore. The pacing isn't too bad, although I have issues with the plotting, and the way things are structured (this is a film in which you are told something at the start that taints the whole viewing experience, and I think the film would have been better with a bit more of a straightforward chronological approach to the events). There are two main turns that the plot takes, and I have problems with both of them for different reasons. One isn't given nearly enough explanation, considering how it plays out in terms of timing, while the other just feels disappointingly predictable, considering the many ways in which Carroll Jr. could have taken the material.

It also doesn't help that the nepotism doesn't seem to be a very wise choice, although it may have saved some money in the budget, and made it easier to get some of the scenes shot (not every actress would have gone along with some of the content). Carroll is just not very good in her role, sad to say, and has to suffer at the hands of the script more than Schubin, who is better overall. The two help one another in a few scenes, but that's only temporary. When the script calls for the relationship to start fraying, leading to possible division between the two of them, it becomes more obvious that one actor is better than the other. François Chau is very good in his small role, overseeing the whole study, and Tara Westwood is someone giving the appearance of being helpful, although Eve stops perceiving her that way as she starts to have very different thoughts on the way the study is going.

What we could have had here is a film that thoughtfully looks at how people put on their best faces at the start of a relationship, sometimes wearing masks that slip ever so gradually over time until one partner looks over to find the other unrecognisable. You can still read that into the movie, but it feels entirely incidental. What you get instead is a promising feature debut that suffers from taking a path that seems far less interesting than some others that were available. 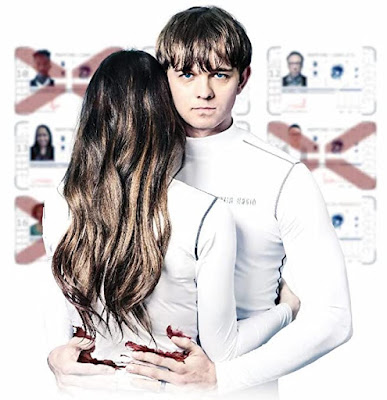