Largely shot in the "found footage" style, Jeruzalem is a horror movie that has a couple of good ideas contained within it, yet ultimately fumbles things as it tries to get more and more terrifying on the way to the final scene. It also isn't helped by the better moments reminding you of things you already saw in the superior [*Rec] series.

Danielle Jadelyn is Sarah Pullman, a young woman about to set off on a holiday to Tel Aviv with her friend, Rachel (Yael Grobglas). Sarah is still grieving the loss of her brother, and Rachel hopes the holiday will help her improve her state of mind. Given a gift from her father, a pair of Google glass spectacles, Sarah can hopefully have the holiday of a lifetime. Changing plans when they meet a young man, Kevin (Yon Tumarkin), who is interested in religious mythology, our leads decide to head to Jerusalem instead. They get rooms in a hostel, where they meet the charming Omar (Tom Graziani), and all seems good. Unfortunately, Jerusalem is about to go through a very bad time, involving dark forces and dangerous entities that act a bit like zombies.

Here are things that Jeruzalem gets right. It generally uses proper names when referencing the technology (which is always preferable to making them all up, where you end up with someone logging into Friendbook and Generic Telecall app), the central characters are likeable, and the creatures are well-realised once they start bringing chaos to the city.

And here's what it gets wrong. As with so many of these films, the gimmick of the style is forced, especially in the third act. It all gets a bit too jittery and hard to keep track of in places. The characters are made to be increasingly stupid, in an attempt to draw everything out for the finale. And there's a plot beat during the last ten minutes that is only saved from being one of the dumbest things I have seen in the past decade of horror because the past decade of horror has had some amazingly dumb stuff in it.

The cast all do a decent job, but they suffer when the script forces them to stay on the tracks laid out for them by writer-directors the PAZ brothers (Doron Paz and Yoav Paz). The good ideas impress by the halfway point, but quickly lose their lustre when the film devolves into the usual shaky-cam, dark pathways, and jump scares.

Planting itself exactly at the mid-point of any random selection of found footage horrors that you could select, Jeruzalem isn't a terrible way to spend just over 90 minutes. There's some very impressive imagery dotted throughout, usually just a brief glimpse as characters run away in fear. It's just a shame that it couldn't have been a bit better. And a bit less silly in places. 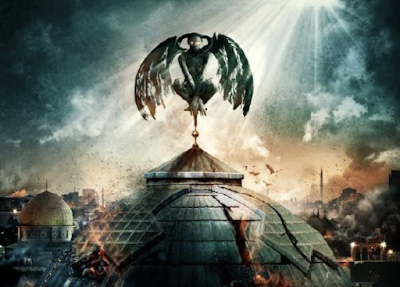