Bob Hope is Larry Lawrence in this spooky comedy that remains a great template for this kind of thing. Take some ghosts and ghoulies. Add a hero who can pretend to have courage for a moment, than ensure we all know how scared he is at all times. And have a criminal sub-plot that may or may not mean the supernatural elements are faked.

One thing leads to another in a busy opening sequence, and Larry Lawrence thinks he has accidentally shot someone dead. Someone that has people who will in turn shoot him back. He ends up bundling himself into the travelling trunk of Mary Carter (Paulette Goddard). Mary is heading to an inherited property on a small Cuban island. It is allegedly haunted. And there is even a zombie living nearby. Hearing of this strange situation, and noting the insistence of someone wanting to keep Mary away, Larry decides to put himself forward as a man who can investigate such matters, and sets out to do so in the company of his servant, Alex (Willie Best).

Adapted from a popular stage play, which had been adapted for the screen twice before (silent movies, both now considered lost), this stands out as a near-perfect blend of thrills, chills, and giggles for viewers. Walter DeLeon adapts the play well, making it a fine fit for Hope and his usual style of gaggery, and George Marshall directs it all at a nicely zippy pace. There are no huge set-pieces, but lots of small ones that flow into one another as the entertainment factor remains high throughout.

Hope is at his easygoing best here, enjoying himself in a character that's about 50/50 when it comes to cowardice and courage, and Goddard is one of those classic leading ladies from this era who lights up the screen whenever she appears, so the banter between the two is very enjoyable. While his role is often just the comedy relief, certainly in the last third of the movie, Best proves himself to be just as amusing and entertaining as the leads, and makes this more than just a two-hander. Paul Lukas is suave and sneaky as someone advising against visiting the haunted property, Anthony Quinn is a possible villain, and Richard Carlson is the smooth and charming Geoff Montgomery.

Some of the jokes have aged worse than others, especially a number of exchanges between Hope and Best, and there is a slight creakiness to it all (everything creaks slightly when it is 80 years old), but this is one of those films that I think everyone should see at least once. It's a classic, in its own way. It just isn't the kind of classic included in most conversations that cover The Classics.

And how can you not enjoy a comedy that has the line "The girls call me Pilgrim, because every time I dance with one I make a little progress."? 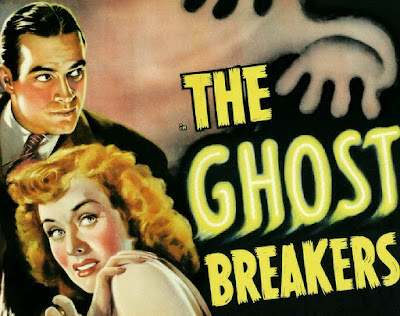