The pope must die . . . in order to kickstart the proceedings of this, the second cinematic adaptation of the implausible adventures of Robert Langdon. It’s a rip-roaring “treasure hunt” through Vatican City, and holds up as an equal to the first film.

Langdon (Tom Hanks) is called to Vatican City after a plan is put in motion that involves killing potential new Popes (I cannot recall the name of the ceremony, they really should just call it Pope Idol by now) in a manner tied to the four elements, branding bodies with special writing that may signify the work of the Illuminati, and having everyone do their damnedest to track down a vial of anti-matter that has been set to explode in mere hours.

With Hanks back in the lead role, Howard back in the big chair, and Akiva Goldsman back on writing duties (this time alongside David Koepp), Angels & Demons is very much a happy reunion for people who clearly enjoyed doing such a great job of things the first time around. While you could continue to complain about to the disparity between popular entertainment and great art (and the common ground), the source material from Dan Brown certainly stands high in the former camp, and both Howard and Hanks are used to delivering to people what they want.

The only downside of this film is the female thrown alongside Langdon for this particular escapade. Ayelet Zurer plays Dr. Vittoria Vetra, but she’s really not given much to do. Compared to the other onscreen allies that Langdon has been paired with, this woman is sorely undeveloped and redundant, for the most part (which is really saying something, considering how consistently weak Brown is when it comes to visiting the same well over and over for his stock of supporting characters).

Hanks is comfortable reprising the famous symbologist, Ewan McGregor is a treat, playing someone who was close to the previous Pope, and believes the church should attempt to be even more progressive, and Stellan Skarsgård is as dependable as ever, here playing a stubborn, no-nonsense, head of the Swiss Guard.

The end may become a bit too ridiculous (which you could arguably say about all Dan Brown tales), but this feels a bit more intense than The Da Vinci Code, and makes absolutely fantastic use of the gorgeous environment of Vatican City. For slick mainstream thrills, I think this is top-notch stuff. 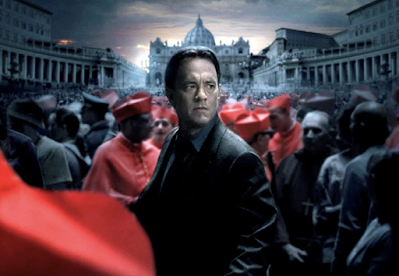