I have been in the mood lately to watch some undemanding '80s comedies, mainly movies that I remember seeing advertised, but didn't actually get around to watching. And I could have sworn that Pure Luck was a 1980s comedy, but it was actually released in 1991. The concept certainly feels like a very 1980s one.

A young woman (Valerie, played by Sheila Kelley) goes missing while on holiday. Her father (Highsmith, played by Sam Wanamaker) is distraught, especially as the investigator he has on the case (Campanella, played by Danny Glover) hasn't managed to find any solid leads. The fact that Valerie is one of the unluckiest people in the world makes things even trickier, but it also leads one man to come up with a theory. He knows someone employed by Highsmith who is equally unlucky. That man is Proctor (Martin Short), and a plan is formed. There's a chance that Proctor's bad luck will allow him to more closely follow the route taken by Valerie, and allow her to be found.

Based on a French film, La Chevre, Pure Luck is exactly what you might expect it is, a vehicle for Martin Short to commit himself to numerous pratfalls in the name of making viewers laugh. And Short is not the problem here. But I'll get back to him later.

Director Nadia Tass doesn't have a grip on the kind of comedy that would allow this movie to be all it can be. I'm not familiar with the original, which may well be a quirky and gentle comedy throughout, but this American take on the material feels too low-key and low-energy. It needs a sense of the bad luck piling up, allowing set-pieces to start small and escalate all the way to some grand finale. That never happens. The film isn't helped by the writing from Herschel Weingrod and Timothy Harris, two individuals who have worked together on a number of better comedies than this one. The problem is that they are aware of the focus of the film being on the physical side of things, and that keeps the dialogue as a lesser priority. The fact that the physical side of things isn't as good as it could be leaves you with a film that has no memorable sequences AND no decent dialogue. There's also a very strange section of the film that starts to change the rules, but it is soon dropped without any satisfying resolution.

Let's get back to Short anyway. I love Martin Short. He's a fantastic comic actor, arguably one of the very greats, and this lead role would seem to be ideal for him. It's not though, mainly because the whole film depends on him tripping, falling, and hurting himself in a variety of ways. He does what he can, but the lack of variety makes it soon feel a bit sad, watching someone throw themselves around for something not really worthy of their commitment to the cause. Glover gets the better end of the stick, disbelieving the ridiculous theory until he starts to see it play out in front of his eyes. He also has to pretend to be taking orders from Short for most of the movie, which allows for a couple of fun moments. Kelley does well with her small amount of screentime, also full of pratfalls, Wanamaker and Harry Shearer (who comes up with the central theory) are just fine, and Scott Wilson has a bittersweet turn as an opportunistic criminal who doesn't realise how much bad luck is about to rain upon him.

Pure Luck is absolutely forgettable, and I am sure that there are very few people who would seek it out. Fans of Short, maybe, and people like me. If you're in the latter category then I feel very sorry for you. 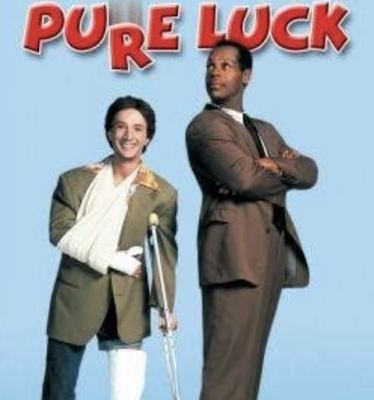