Written and directed by Bozidar D. Benedikt (who you may not have heard of, his filmography is made up of a few shorts and about four features), The Graveyard Story is an attempt to blend the supernatural and the classic detective tale format . . . up until the moment, quite early on, when it jettisons any supernatural elements. So it's really just an odd detective story.

John Ireland plays Dr. McGregor, a man who becomes obsessed with discovering what happened to a young girl, Dolly Cooper, after he discovers her grave. He hires a detective, Ron Hunt (Adrian Paul), and he starts digging into some local history. What he discovers ends up taking him on a journey further and further away from the grave, but closer to some real danger.

This is a bad film, but it's also quite a treat. It's bad in a way that leaves everything quite flat, with the dialogue and pacing dragging down/bumping up what would otherwise be a very standard crime thriller (albeit one with few thrills). Some moments are so amusingly bizarre that you'll either end up loving it or wanting it to end ASAP.

Paul, not someone with a huge filmography to look through, tends to let himself, and the movie, down by not fully committing to the role. I understand his reasoning, wanting to play his character in a way that is not just a bag of familiar tropes and cheesy dialogue, but the character is written in a way that makes him, yes, a bag of familiar tropes and cheesy dialogue. So leaning into that would have been a better fit for the movie. As it is, Paul does what he needs to do, but doesn't seem to have any faith in playing his character as an entertaining archetype. Christine Cattell, on the other hand, has about as much fun as she can have with her clothes on. Her character, Vicky, is interested in solving the mystery that is brought to her attention, but a lot more interested in solving the dilemma of removing Ron Hunt from his underoos. Nobody else stands out, which isn't a bad thing, considering how bad a number of the performances could have been. I won't say that anyone is doing great work, but they're working well enough with the material.

Benedikt does a surprisingly good job of setting the film up as one thing and then turning it into something else, and the plotting feels as if it holds up under a little bit of scrutiny (or maybe, as sometimes happens, I was in a forgiving mood as I enjoyed a day off, munched snacks, and watched the movie). There's a lack of polish throughout that makes it feel like a TV movie, which may have been the fate befalling it outside of Germany, but the weaker elements - lack of any visual style, clumsily-scripted moments - are offset by the way things come together so well in the third act, including one payoff that had me both laughing and wanting to applaud the audacity of it.

I watched this with an idea that I would end up having to just tolerate it, and maybe thinking I would at least wring some comedy from it for this blog. Now I end this review by saying that I would happily watch it again, and not just for all of the "wrong reasons". 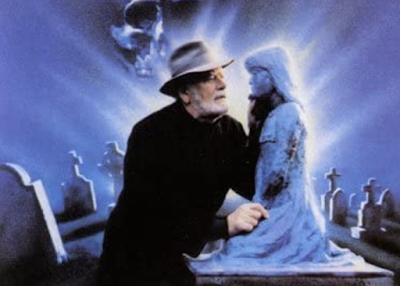