When Blood Vessel started, I am not going to pretend that I didn't make a couple of assumptions. The first one was a prediction of the ending, and I am happy to say that I was wrong. The second one was a thought about this being a remake of a fun '80s horror Death Ship. If you're a horror fan of a certain age then you remember Death Ship, even if you never saw the movie itself. It was yet another one of those titles that had a ubiquitous trailer during the early-ish days of VHS.

But that is neither here nor there, because Blood Vessel is a different beast. And it happens to feature a different beast. It starts with a group of people drifting along in a life raft. They're in the North Atlantic. It's 1945. Tired, thirsty, and hungry, their fortunes may change when they pass by a huge ship that they manage to board. It's a Nazi ship though, but also a seemingly abandoned one. As this is a horror movie, however, viewers can be pretty sure that the ship is not as abandoned as it seems. The corpses littered around show that something very bad happened. But what? That may be revealed in time for the second half.

Directed by Justin Dix, who also co-wrote the screenplay with Jordan Prosser, this is a film that ends up becoming a bit more disappointing after every main sequence. Not that anything is handled so badly that it is unforgivable, it's just that it starts off with a bunch of very familiar tropes and never does anything to subvert them. The stock group of characters feel as if they could be lifted from any other survival horror movies (the greedy one, the "fair maiden", the person of lower rank who is now an equal, the enemy they are forced to work with, the person driven by self-preservation, etc), and not enough of them stand out from the group to help you become invested in wanting them to stay safe. That's a shame, because Dix does a great job in the other departments, making the visual side of things a real treat. The production design throughout, the special effects, the camerawork, all of those things are great. The two main areas that let things down are the script and the main death scenes, with the latter even more disappointing than the former in some ways (us horror fans are used to some weak writing, but one or two spectacular deaths can often make up for that).

The cast don't do a bad job. Nathan Phillips is the rough potential leading man, and Alyssa Sutherland is the leading lady, both at times arguably better than the material they have to work with. The rest of the group allows for turns from Robert Taylor, Christopher Kirby, Alex Cooke, Mark Diaco, and John Lloyd Fillingham. It's a shame that they're all wasted, with nobody getting a big moment here and there to punctuate the proceedings (although you can tell that some scenes have that aim). Ruby Isobel Hall makes a stronger impression in her role, a young girl named Mya who is found on the boat, but even she is just a riff on the whole "Newt in Aliens" storyline.

Not a hard film to watch, Dix tries to at least pace everything well and it doesn't overstay its welcome, but Blood Vessel could have been much better than it is. It could have been a bloody and exciting adventure, whereas it ends up feeling like a flashback episode of The Strain instead. 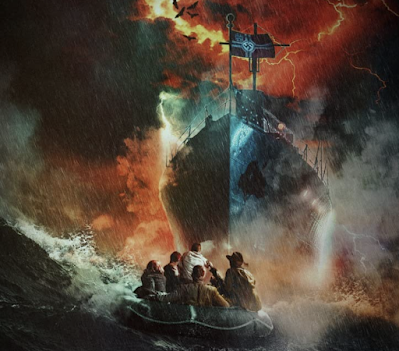