The general idea of Tales From The Lodge is a good one. It’s a comedy horror anthology that makes the framing device just as enjoyable as any of the main tales, and also has a lot of fun with the horror genre tropes. Mind you, it is another movie co-starting Johnny Vegas and Mackenzie Crook. The last time I recall seeing them onscreen together was in Sex Lives Of The Potato Men. I’ve not been brave enough to revisit that, but the scar is still on my psyche.

A group of friends gather to scatter the ashes one of their number, Jones, who committed suicide in a lake very close to the titular lodge. There’s Martha (Laura Fraser) and Joe (Crook), a couple battling on as Joe waits for a new heart. There’s Emma (Sophie Thompson) and Russell (Vegas), a couple happy to get away from their kids for a while. Last, but by no means least, is Paul (Dustin Demri-Burns), a womaniser who has unwisely decided to bring along his latest girlfriend, Mickey (Kelly Wenham). Things soon get a bit tense and emotional, and everyone has a turn of telling a dark and twisted tale.

Written and directed by Abigail Blackmore, making her feature debut, Tales From The Lodge is a strange beast. It is sometimes fun, sometimes quirky and entertaining, but always never too far away from one sour note to undo any good work. As a sweetener for the cast, I’m sure, each participant gets to direct their own tale, but nobody brings any unique voice to the proceedings. That isn’t necessarily bad, in a way, as it allows the film to flow as one piece made up of the interconnecting parts, but it also feels like a bit of a missed opportunity.

The cast all do well enough in their roles, although some fare better than others at the hands of the script. Fraser comes off the worst, a pretty unrelentingly horrible and moody person (for a reason, but it doesn’t make her any easier to enjoy while onscreen), but Wenham and Demri-Burns are also required to twist themselves in some knots to sell their stories, which becomes even more difficult to buy into during the climax of the proceedings.

And that climax. To say it is problematic is putting it mildly. The more I think about it, and having been more aware than ever before of certain issues that the ending here brings to mind, the more horribly misjudged, at best, and ignorant it seems. It’s undoubtedly one of the worst I can think of in recent years, although there’s also a part of me thinking it may well be playing into some of the ridiculously wild endings of some of the schlocky horrors of yesteryear. If the rest of the film had been in the spirit of a throwback slasher then that would be easier to accept. As it stands, not so much.

Ending aside, although I know many who will not be able to see past that (and rightly so), this is a film that keeps skirting close to being good, without ever fully reaching that standard. Blackmore needs to learn some lessons from this, and hopefully do better next time. 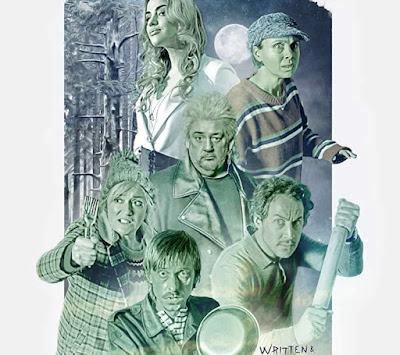