If you're the kind of person who believes that the UK is being swarmed by "illegal immigrants", all aiming to come here because the system is so easy to play, and immediately being handed a 7-bedroom house and £500 a week, then His House is definitely not the film for you. This depicts the lead characters, a pair of asylum seekers, as real people with very real horror in their lives. It then adds some more horror, a bit of cinematic horror, and starts to intertwine things together in a way that endangers both of their lives.

Sope Dirisu is Bol Majur and Wunmi Mosaku is Rial Majur. They have travelled together from a country where ongoing war has cost the lives of too many already. It wasn't always just the two of them either. A child was lost along the way. Having waited to have their case processed, Bol and Rial are given a small house to live in, with numerous conditions to their stay (as their case goes through the next stage) and a weekly sum of £74/week to live on. It seems like a great new start for them. But there's something else in their new home, a supernatural force that knows exactly how to frighten and torture them. If they cannot defeat it, they will lose everything.

Based on a story by Felicity Evans and Toby Venables, His House is a feature debut from writer-director Remi Weekes, who has a number of shorts to his credit from just over the past decade. It's not only a superb feature debut, it's a superb horror movie. It mixes together the horror and the journey to seek asylum so well that it's a reminder of just how effectively the genre can be used against a backdrop of thought-provoking social commentary. There is nothing wrong with a horror movie that has a maniac going all stabby on horny teens, but there is equally nothing wrong with a horror movie that has a bit more to say alongside some solid scares.

Visually intriguing throughout, Weekes keeps things varied as we are shown scenes of the dangerous journey to the UK, scenes of Bol and Rial trying to integrate into a local community that doesn't seem to want them there, and scenes of the house becoming more creepy, lively, and damaged. Things may grow increasingly dark as the story unfolds, but even daylight does not guarantee safety. We see that in the sun-drenched scenes of a war-torn landscape, we see it as our leads encounter "neighbours", and there's no escape from a nightmare that could end lives in a couple of different ways, either by destroying the Majurs physically or resulting in them losing their status in the UK, which would lead to them being deported back to somewhere they would be much less likely to survive.

Dirisu and Mosaku are both excellent in their roles, believably earnest and worried about their futures, trying to work things out within an environment that places extra restrictions on their freedoms (as they wait in hope for a real freedom that will allow them to finally relax). The full story of their journey to the UK, revealed in flashback throughout the film, doesn't really change how well-placed they are as lead characters, because you've taken a liking to them from the earliest scenes, and you can consider how desperate anyone escaping their situation could be. Matt Smith gives great support in the role of Mark, the liaison officer who shows them to their new home and seems to hope for their success. There are other, no less important, characters who appear, but I'll leave you to discover those for yourself.

Loaded with poignancy and real consideration, and with a script that emphasises the language used to keep things officious at all times, even as people may be almost crying out for a more human, a more empathetic, approach to their situation, His House is one of the best films of the year, a timely one at that, and certainly the best horror movie. 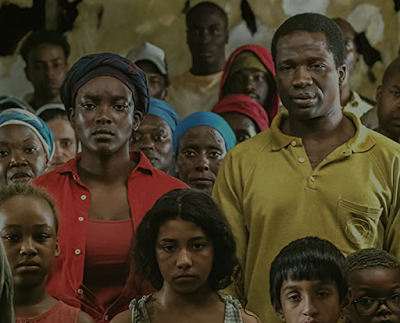