Despite knowing how they are generally viewed by many other people, I am a BIG fan of the previous movies featuring the character of Robert Langdon. Having read most of the books written by Dan Brown, I knew the way he created the contrivances and characters, and the movies managed to move along at a brisk enough pace to make me forget the increasing incredulity of the set-pieces (almost). I was looking forward to Inferno, remembering the high stakes and the tense final act.

Sadly, this is the weakest of the cinematic trilogy, and it's easy to see why. The source material just isn't as easy to translate into cinematic entertainment, and there's also the small problem of each subsequent film highlighting just how many times Brown reaches for the same bag of tricks. Director Ron Howard cannot do much while tied to the novel, and writer David Koepp doesn't want to take any risks in his adaptation of the work.

Hanks returns once again to play the hero, who this time starts things by waking up in an Italian hospital with what seems to be a very bad case of amnesia. He barely has time to try and remember who he is before Dr. Sienna Brooks (Felicity Jones) is helping him to evade a deadly assassin. The two of them then race against the clock to hopefully stop a madman from releasing a virus that will cut the population of the entire planet in half.

It's hard to work up any enthusiasm for Inferno, it's such a mediocre and disappointing movie, especially coming after two much better films. Things start promisingly enough (there's the suicide of the madman who has already put his plan in motion, there's Langdon having a nightmarish vision of people burning to death around him), but that is all soon forgotten as the plot starts to trudge along from one weak set-piece to the next. Even the travelogue aspect isn't all that enjoyable, with the camerawork and visuals surprisingly dull throughout. How the hell do you make Venice look anything less than eye-poppingly gorgeous??

Hanks is yet again a comfortable fit in the role, and Felicity Jones is an enjoyable co-star for him, hampered by the material, but buoyed by the fact that she's Felicity Jones. Omar Sy is okay, but equally hampered by the material, and there are unmemorable supporting turns from Irrfan Khan, Sidse Babett Knudsen, and Ana Ularu. Ben Foster stands out, despite his limited screentime, thanks to his role in one or two of the most intriguing scenes.

Others might end up enjoying this more than I did. If you haven't read the books, or seen the other movies, then you may have a better viewing experience. I found it a big disappointment, especially following on from the two movies that preceded it. 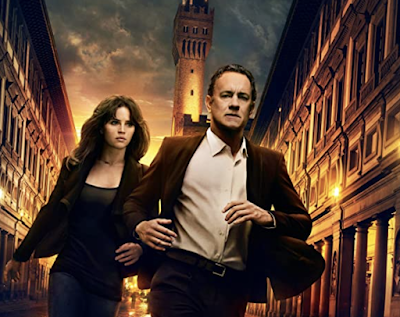