Here we are, a special episode of the much-anticipated anthology series springboarding from the classic movie, and I felt it should be discussed here. It's not a movie, I know, but it's not the first time I have discussed something here that is not a movie. And it won't be the last time either.

A lot of people were delighted with the news that this series was coming. Many people are still delighted that it has happened, with some commenting that the feel of the show is just what they wanted, and the stories and framing make everything seem nicely in line with that Creepshow vibe.

I have to respectfully disagree.

Much like the tale of the monkey's paw that features in one episode in the first series, Creepshow is a classic example of being careful what you wish for. We already had the classic first movie. A lot of people really like the second movie. But there was a third movie, which was pretty bad. Now we have this, arguably the weakest of all of the products that have the Creepshow name attached.
I don't know why I held out hope that this animated special would be better, but I did. Maybe I was carried along on the wave of positivity that seems to keep coming from the horror community. But let's be clear, I cannot help thinking that the positivity, the love, for this series is coming from people who are still hoping it becomes better than it has been so far. As easy to please as I am, the hit rate for the show has been just below 50%, at a conservative estimate. The better stories have been good, the worse stories have been godawful.
A lot of the success depends on the source material, so I was pleased to see that the first tale this time around was "Survivor Type", a dark and twisted Stephen King story about a man who ends up on a desert island, and aims to stay alive for as long as possible, no matter what. I've long been a fan of this story (which I first read in "Skeleton Crew" and, considering the nastiness of it, using animation to tell it seemed like a perfect choice. Kiefer Sutherland voices the main character, the animation style is okay, and it wasn't that bad. If the second tale was a good one then I could see myself enjoying this special.
The second tale, "Twittering From The Circus Of The Dead" was not a good one. I'd actually say it sit easily alongside the worse of the tales featured in season one. A young girl (voiced by Joey King) and her family end up going into a roadside circus attraction, which features zombies and people in peril. The people in peril act as if they're genuinely afraid. I am sure you can guess why. Based on a short story by Joe Hill, I can only assume this was picked as a way to give the special that father-son writer connection, all this did was make me wish they had gone with some other, ANY other, Joe Hill story. Given the form, this would have been an ideal opportunity to introduce people to the quirky world of Pop Art (okay, not as grounded in horror, maybe, but a much more interesting choice).

I'll watch a second season of the show, but it's become increasingly obvious with each episode, and particularly with this special, that the people crafting Creepshow (and it's Greg Nicotero who has his name writ large over most of it) have forgotten how to capture that spark of magic that makes the original film such an enduring classic, and even makes the second film a fun time for horror fans. I hope they bring some people on board soon who can help them remember how to find it.
4/10
https://ko-fi.com/kevinmatthews 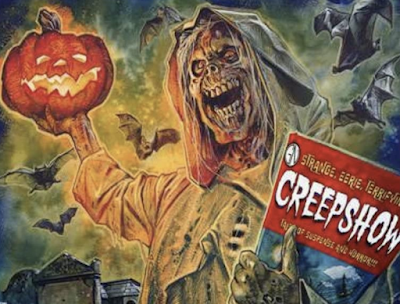