I enjoy going into every film blind, although it is sometimes impossible to do so. I try anyway. Which can lead to some big surprises. That's what happened with Hack-O-Lantern, a slasher from the latter half of the 1980s that I somehow thought was a more modern film with a distinct style lifted from that era, as we've had in a variety of other horror movies in recent years.

Everything starts with some black magic. There's a grandpa (Hy Pyke) who is in charge of a satanic cult, and he seems to be majorly interested in his grandson, Tommy. There's a bit of death and darkness, then we go forward twenty years. Tommy (played by Gregory Scott Cummins) is still seen as the favoured one by Grandpa, his brother (Roger, played by Jeff Brown) is a local police officer, and his sister (Vera, played by Carla Baron) is just looking forward to the big Halloween dance party. In fact, Vera wants to set Roger up with Beth (Patricia Christie). Add a highly-strung mother (Amanda, played by Katina Garner) and Tommy's girlfriend, Nora (Jeanna Fine), and you have everyone in place for what could be an entertainingly bloody bodycount movie.

There's no denying that Hack-O-Lantern is ridiculous. You get the expected wildly varying quality of acting, you get some crazy dream imagery, and you get thrown into a crazy blend of family drama and satanism without any attempt to ground things in a familiar reality. This is a movie world, and you're invited to go with it from the opening scenes or to turn it off.

Director Jag Mundhra knows what is expected from this type of film, and he delivers. The screenplay, by Carla Robinson, is weak in terms of the dialogue between most of the main characters, but it's enjoyably playful when it comes to the actual main plotline of the mysterious killer committing their kills. It also has an ending that is both ridiculous and genuinely impressive. I am not the best at being able to spot upcoming twists and turns, but was pleasantly surprised by this particular resolution.

It's not all good, of course. The low budget adds to the crude charm of the whole thing, but the guy who leaves the Halloween dance party to deliver a stand-up comedy routine for a few minutes, while everyone stands around him and appreciates his performance, is very strange. I have to assume that he either had a hand in producing the movie or he was a friend who managed to make people laugh often enough that someone thought this should be his big break.

Pyke is the highlight from the cast, giving a performance that overshadows everyone else in the movie. It helps that his character is written to be absolutely selfish and uncaring towards anyone who isn't a family member (and even the family members are sometimes treated with disdain). As for the rest of the cast, Baron and Christie end up doing better with their roles than expected, perhaps because the slasher madness is couched in the family drama and attempts to set up a decent date for the Halloween dance.

It's not going to be one that you automatically recommend to others, it stands out as an oddity, despite having enough of the standard slasher movie elements in place, but Hack-O-Lantern may be one that you end up returning to more often than some of the better-known titles from the 1980s. It's rough, it's bonkers, and it's a lot of fun. 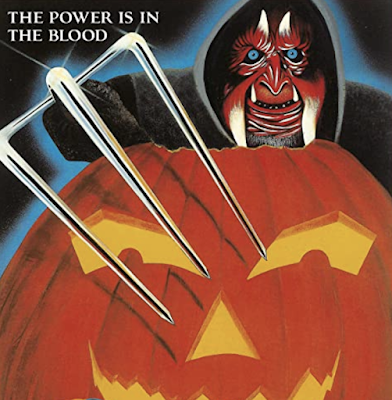