The third, and final, collaboration, between writer John Hughes and director Howard Deutch, this is also their weakest. It's good fun, with two leads doing excellent work, but it's just a bit strangely divided between the storyline for the adults and a storyline following a smitten teen.

John Candy is Chet Ripley, the husband/father keen to give his family a proper holiday experience in a lakeside cabin. The Ripley family is unexpectedly joined by Roman Craig (Dan Aykroyd), Kate Craig (Annette Bening), and their twin daughters. Kate is the sister of Chet's wife, Connie (Stephanie Faracy), and it is very clear from the earliest scenes that the Craigs have a very different outlook on life than the Ripleys.

The Great Outdoors works as well as it does for two reasons. First, the interplay between Aykroyd and Candy. Written as very opposite characters, Aykroyd revels in being obnoxious and having no class while Hughes very quickly becomes tired of his nonsense. Second, there are some very entertaining set-pieces spread throughout the runtime. There's the tale of an angry bear that was made bald, a restaurant that has a challenging steak on the menu, some thrilling time spent water-skiing, and a group of cute raccoons that just want to enjoy picking through the trash.

Although Aykroyd and Candy are both doing top work here, they're nicely complemented by Faracy and Bening, playing two sisters who have gone on very different paths in life. This was the theatrical movie debut for Bening, and it's arguably one of her simplest roles, but she's a natural onscreen presence. Faracy does well to avoid just being stuck as "the boring, nice one", and both women feel well-suited alongside their partners. Chris Young is the older of the Ripley sons, and he does just fine in his own storyline that sees him falling for the charms of a local girl, Cammie (Lucy Deakins), but both of these youngsters suffer from the teen movie dialogue jarring against the rest of the movie, which enjoys building and building the friction between the adults. You also get a fun small turn from Robert Prosky, and the other child actors do everything asked of them.

Deutch directs as competently as he usually does, and he once again stays nicely in line with the tone that Hughes provides. Although predictable from start to finish, the set-pieces work really well, and are given just the right of time to let the laughter build without overstaying their welcome. Lessons are due to be learned, different views clash with one another, and some of the one-liners are hilarious, helped by the performers delivering them.

Despite the better qualities, I'd still end up placing The Great Outdoors somewhere around the halfway mark if ranking the movies written by John Hughes. It's a lot of fun, yet nowhere near his best. 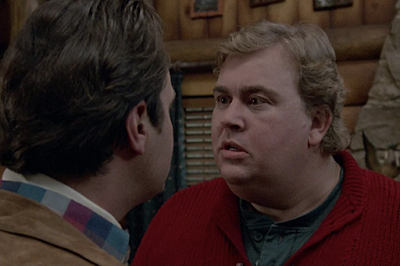