I have some issues with the tale of Wuthering Heights, that classic moors-set tale of love and psychological torture written by Emily Brontë. My biggest problem with it is that I sometimes confuse it with the superior Jane Eyre, the great gothic romance written by Charlotte Brontë. I know, I know, entirely my fault, but I can't ever just let go of the fact that this is the weaker of the dark works from any of the Brontë sisters, despite it giving us a bloody great Kate Bush song.

There have been many TV and film adaptations of the tale, and this time around it is the turn of Andrea Arnold, who directed and reworked the material with Olivia Hetreed. It got some awards, some critical acclaim, and probably doesn't stand out to anyone as an embarrassment to her filmography. Unfortunately, I really didn't like it.

We first meet Heathcliff and Cathy as youngsters, played by Solomon Glave and Shannon Beer, respectively. It is then up to James Howson and Kaya Scodelario to portray them in adulthood. There are other people involved in the plot, but it's all about Heathcliff and Cathy. The main twist given to the material here is that Heathcliff is played by a black actor, and he is allowed to use the word "cunt".

Perhaps I wanted something more traditionally cinematic, or perhaps I felt that the new twists on the material felt disappointingly like someone desperate to shock viewers (I'm on about the language and one or two sexual scenes here, not the casting). Maybe I am just sick to the back teeth of films that shove the realism in your face by having far too many scenes of characters getting their fingers caked in mud, delivering ugly and irritating camerawork, and, of course, having the soundtrack feature a lot of heavy breathing. Because nothing says "critically-adored cinema verité" like murky cinematography and a lot of breathing sounds.

The leads don't do a bad job in their roles, considering what they're given to work with, but they're hampered by the script and shooting style. Howson, who was not acting before this (and has done nothing since), is admirably confident throughout scenes of growing intensity, and Scodelario makes an appealing Cathy, with both leads certainly selling chemistry between them as they take turns to treat one another with love and apparent loathing.

I am sure a lot of people will love this. My own reaction to it is simply based on the fact that I know showing some bleak, ugly scenery doesn't mean your film has to necessarily be bleak and ugly throughout. Arnold made a stylistic choice, and it's one I disliked intensely. Add the "try hard" elements to that, and this just really wasn't for me. The strength of the source material still manages to barge through at times though, so there's that. 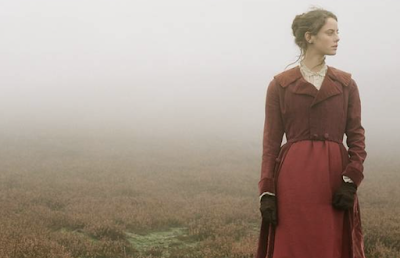