It seems like only the other day that everyone was going crazy for the WNUF Halloween Special, an authentic-looking presentation of a fictional show recorded in the late 1980s that presented some spooky supernatural events. I thought it was okay, slightly undone by the sheer number of fake ads (all very well done, mind you) and without a payoff that was as satisfying as it could be. I'm in the minority though.

I think less people will love this effort, another excuse for director Chris LaMartina to show his knack for getting things pretty spot on when it comes to recreating a particular style, but What Happens Next Will Scare You at least deserves some goodwill for trying to provide horror fans with some pure and simple fun.

The main premise concerns a bunch of people who work for a click-bait website being asked to stay late by the boss and pitch their latest suggestions for an article about the scariest online videos. This allows them to show clips, giving us an anthology movie that tries to be equal parts comedy and horror.

The stories shown cover a wide variety of topics, from a sasquatch to a lake monster, from a demonic toy (a wonderfully cheeky riff on Annabelle) to a vlogger who ends up regretting her bullying ways. And there's a cursed vinyl record played in one recording that seems to start affecting the group itself.

Co-written by Jimmy George and LaMartina, What Happens Next Will Scare You works best when it edges away from the comedy. The framing format is amusing, and I hope many people hate click-bait as much as I do (does anyone actually enjoy it?), but the three best tales focus more on the details and creepiness than any comedy. One involves a clown, one involves a 911 call, and one involves that aforementioned toy. Having said that, one of the weakest, surprisingly, looks at exorcism rites.

The cast are all just fine. Kalima Young is the boss, June, keeping everyone back and demanding that they earn their positions in the company, and Melissa LaMartina, Rachel D. Wilson, Kathy Carson, Troy Jennings, and Johnny Marra make up the core characters, all bringing their own particular approach to the exercise. Nobody really stands out, but all do well. The standout is actually a voice-only role, Nolen Strals as the voice of George O'Bannon, the man who makes a very memorable 911 call.

It would be easy to criticise the varied quality of the FX on display here, and equally easy to criticise the sillier moments (the lake monster is quite bad, and a moment with a VHS tape is partly awful and partly amusing), but What Happens Next Will Scare You simply aims to entertain for a little while, and it mostly succeeds. Unlike a number of other modern horror anthologies, this has a nice and strong connective tissue throughout, and I wouldn't mind another go at the format from LaMartina and co.

P.S. It was a real treat to watch this for free over at the Shocktail Hour With Aurora Gorealis on Facebook, and I really appreciate the film-makers providing us with a little treat in these monotonous lockdown times. 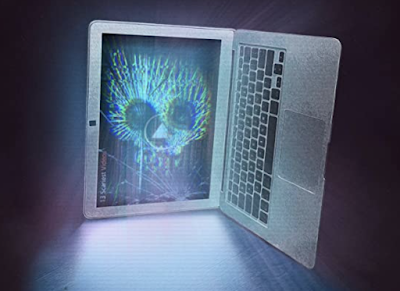