Sometimes I like to balance out my reviews. And when I say sometimes I actually mean most of the time. It is good to be able to see the positive in a bad movie, and also to acknowledge the negative in a good movie. So I hope you believe me when I say that I struggled to think of elements in Candy Corn that I could praise. And I found myself wanting. Technically, this sits above many cheaper, rougher, less competent, movies. Considering the approach taken, however, and it is clear that you have a cynical bit of fan-pandering that doesn’t deserve your time.

A bullied young man is once again bullied. Things turn tragic. And then everything goes supernatural and deadly when the bullying victim is turned into a force of vengeance. Sheriff Sam Bramford (Courtney Gains) is a step or two behind, as the deaths start to occur, but gets himself up to speed quite quickly.

Writer-director Josh Hasty takes a very flimsy premise, attempts to dress it up with some thick Halloween atmosphere, and protects himself further by utilising Gains, P. J. Soles, and Tony Todd in the cast. That would be perfectly fine if he used them well, but he doesn’t. Todd is particularly wasted, but he’s there, and that means horror fans may check out the movie just because of his presence.

Gains has quite a central role, so at least there is that, but the other leads are Pancho Moler, playing the character who sets everything in motion after the bullying incident, and the victims. There are some other people, but most of them are very forgettable, with the exception of Madison Russ, playing Carol, the girlfriend of one of the bullies. It's also good to see Sky Elobar, but only because you can see him and think "heyyyy, that's the guy from The Greasy Strangler".

Hasty has put no effort into this, what is essentially a very basic slasher without good enough characters, good enough kills, or even a large helping of gratuitous nudity to make it all pass more enjoyably. The script is poor, there's never a feeling of anything really being at stake, despite people being bumped off by a vengeful killer, and the whole thing feels like some cheap attempt to bilk some money from horror fans who will be drawn in by the names. Annoyingly, we know this will work, to a degree. And if Hasty had used the horror icons a bit better then this would have been easier to shrug off. It's not the opportunism that rankles so much, it's the laziness. There's nothing here to distract you from a very dull horror movie experience.

Candy Corn would not have been a recommendation even if it had been released in the 1980s or '90s. The fact that it is a 2019 release is bewildering. I'm sure many will still seek it out. I highly recommend that you delve into some past gems you may have missed instead. This one is best left to fade into deserved obscurity. 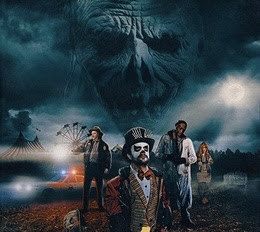