and gave her mother forty whacks.

When she saw what she had done,

she gave her father forty-one."

Is it even possible to write something about Lizzie Borden without quoting that macabre little rhyme? I think not.

There are a couple of reasons why I decided to watch Lizzie this week, and place the review here. First of all, it's a good story of intrigue and murder. Lizzie Borden surely remains the most famous, alleged, axe murderer in history (unless I am forgetting any other obvious choices). Second, although I have not loved all of the movies that she has been in, I have started to enjoy different performances from Kristen Stewart in recent years. She's actually been as eclectic in her choices as her past co-star, Robert Pattinson, but has received not a quarter of the praise. Is she his equal? I am not going to say. All I know is that my opinion on her changed after seeing her performances in a couple of Olivier Assayas movies (Personal Shopper being a real highlight) and enjoying her flair for the comedy in Charlie's Angels.  With the upcoming Happiest Season (a LGBTQ+ Christmas movie featuring Stewart in a lead role), it's clear that she has been picking and choosing her projects based on an instinct that has allowed her to both enjoy her post-Twilight career and show some more sides of her personality.

Stewart plays Bridget Sullivan, a new member of staff to the Borden household in this tale. The titular Lizzie is played by Chloë Sevigny. Things start with the discovery of a hacked corpse, and then it is time to wind back and look at the days and weeks leading up to the murders, with the two main victims being Abby (Fiona Shaw) and Andrew Borden (Jamey Sheridan). You have standard family tensions, chemistry between Lizzie and Bridget, and creepy, predatory, abuse from Andrew. There's also an ongoing dispute over the potential family fortune, something that John Morse (Denis O'Hare) wants to keep an eye on.

Written by Bryce Kass and directed by Craig William Macneill, with neither individual having many other full movies to their credit, it's easy to see why Lizzie was viewed as quite an easy tale to make into a solid little biopic/crime drama. Most people tend to be familiar enough with the story, it doesn't need a whole lot of fancy bells and whistles, and there's the enduring allure of it being an "unsolved crime", mainly thanks to how things were handled in the immediate aftermath.

The thing is . . . Lizzie doesn't sell any of that angle. It settles for being a salacious telling of the crime that people think they already know. Want to know that Lizzie definitely committed the crimes? Sure thing, here you go. Blood on her clothing? Hell no, we'll make her naked. A look at the various conflicting and cocked-up evidence that wasn't properly used? Nope. But look . . . naked woman with axe. This is a film that seems to have been written from a basic notion of the crime, everything that has been assumed for years by people who haven't read even a little bit more on the case. I COULD be wrong, but they even seem to get Lizzie Borden's age wrong when the end title card notes her death years later.

Sevigny is very good in the main role, and Stewart works well enough alongside her. They may not give their best performances, but they're saddled with a script that wants to make this nothing more than a fairly standard tale of sex and violence. Shaw and Sheridan also do good work, with the latter having to play up every bad part of his character until he's almost a pantomime villain by the third act (if pantomime villains were also a bit rapey), and O'Hare is fun in his scenes. Kim Dickens isn't given much to do, playing Lizzie's sister, Emma, and the same goes for Jeff Perry, playing Andrew Jennings, the defense attorney for Lizzie.

Considering the various aspects, this isn't a bad film. The acting is good, the look and feel of the film works, even if it tries to make the most of the budget by being made up of mostly interior shots (which is fine, considering the story showing us the growing tension within one household), and it does a good job of depicting the actual act of the murders. It's just a shame that the script feels so sloppily put together, and takes no interesting turns. 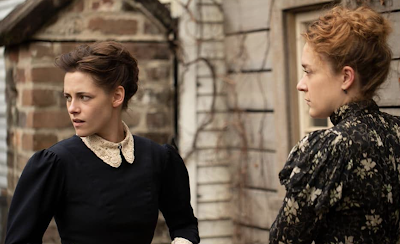