It's hard to pin down just how this manages to so often avoid the sense of fun it is aiming for, but a large part of its failure lies with the inability to commit to any one approach to the material. The early scenes have some movie discussions (the employees are going to enjoy their own screening in the cinema once the public have gone, and are debating between Encino Man and A League Of Their Own), but the rest of the movie drops any attempt to use the cinema setting for more nods and references, making those moments feel like some easy point-scoring. You get the Christian ethos of the group, the employer (Mr. Pike, played by Bill Phillips) viewing his workers more like members of a congregation than staff. That does play into the plot more, but is also never explored as fully as it should be. And you get the main characters themselves, given footnotes of a backstory that simply never adds enough to the proceedings.

It also doesn't help that the cast, while not terrible, aren't the best at pitching their performances in line with the material. Mind you, considering what I have just said in the preceding paragraph, I'm inclined to think that it is hardly their fault if they're unable to find the most suitable style to match the changeable tone. I liked Jillian Mueller in the role of Chaz, the main female employee, and Katelyn Pearce made a believable succubus, but nobody else really stood out, or stood out for the wrong reasons.

Racela directs with a lack of flair, the one high point being some clips of the movie within the movie (it's enjoyably odd and dark), and the script only livens up during moments of genital-related gore. The standout scene involves some trauma that will make most male viewers squirm, and maybe even look away, but it's a shame that the rest of the film doesn't come anywhere close to that, in the mix of bloodshed, unease, and amusement. 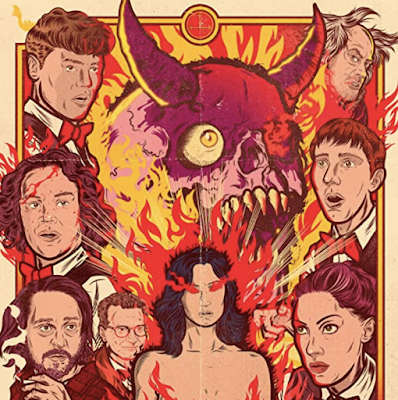