It had been quite some time since I had seen How To Lose A Guy In 10 Days. The last time was certainly before the transformation of Matthew McConaughey from rom-com lead to versatile actor in more critically-appreciated fare. And here's the main thing I couldn't help thinking about while watching the movie; McConaughey is doing work here that is as good as work he has been doing in recent years. It's just a very different kind of performance, one that makes use of his innate charm and his ability to handle light comedy. I'm actually keen to check out a number of other McConaughey movies from this period, to see for myself whether or not I was being a bit unfair to just ignore them while the man was cashing those paychecks and laying the foundation for years in which he could make some more daring choices.

McConaughey plays Ben, an advertising executive who wants to be in charge of a large campaign selling diamonds. Ben doesn't seem to understand women, however, because he hasn't had a relationship that has lasted more than a few days. If he can meet a woman, and get her to fall in love with him, before a big event party then his boss may just let him head up the campaign. He is told to make his move on the lovely Andie (Kate Hudson). What he doesn't know is that Andie writes a "How To" column in a popular woman's magazine, and her latest project is "How To Lose A Guy In 10 Days". Andie is about to test the waters, using every major faux pas committed by women who become too needy, clingy, and overbearing. Despite their agendas, Ben and Andie really start to warm to one another, and you know there will be a standard rom-com third act full of revelations, confrontations, and a race-against-time to fix some major damage.

Based on a book by Michele Alexander and Jeannie Long, subtitled "The Universal Don'ts Of Dating", How To Lose A Guy In 10 Days is a self-aware and clever entry in the rom-com subgenre. The screenplay, by Kristen Buckley, Brian Regan, and Burr Steers, is very happy to hit all of the required beats while also letting the central characters try to push each other further and further apart as they feel themselves growing inexorably closer, emotionally.

Director Donald Petrie has a good handle on things (his varied filmography doesn't show this as a given, but he had a great double-whammy of Miss Congeniality and then this movie in the space of a few years) and he's helped by the assembled cast, with a number of wonderful supporting players orbiting our charismatic leads.

Hudson is perfect here, having a lot of fun as she goes more and more over the top in her "girlfriend from hell" guise and still radiant when her character is allowed to relax and not work on her agenda. McConaughey is his usual charming self, all abs and gleaming teeth and gentlemanly politeness and respect. Bebe Neuwirth and Robert Klein play the bosses of Hudson and McConaughey, respectively, and there are fun moments for Kathryn Hahn (the unlucky-in-love friend of Hudson, and inspiration for the article), Adam Goldberg, and Thomas Lennon (the latter two friends of McConaughey, hilarious when they get to look on and comment on their friend's disrupted "new life").

You can act snobbish and dismiss films like this easily enough. Okay, they are formulaic and predictable. But that doesn't mean they aren't enjoyable, especially when you have stars who so easily emanate such an air of, well, stardom. Sometimes it's a treat to watch actors you know disappear into roles that explore various facets of the human experience, and sometimes it's a treat to watch stars be stars. 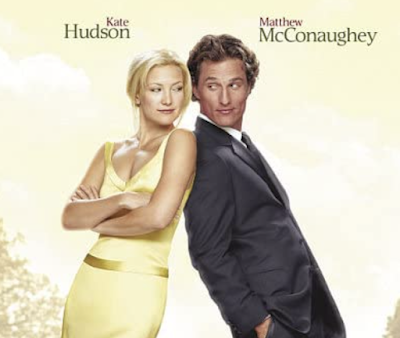