Netflix And Chill: The Possession Of Hannah Grace (2018)

If you enjoyed The Autopsy Of Jane Doe then you should enjoy this. It is very similar, in that a corpse is delivered to someone who starts to suspect there may be some secrets worth discovering about the body. It also has some similarities to Last Shift, which has a young female police officer in trouble. Strangely enough, I loved the former and only quite enjoyed the latter (although many others loved it). And I really liked this.

Shay Mitchell plays Megan Reed, an ex-cop who left her time on the force due to some personal problems. She is able to get a job working the night shift in a morgue, which leads to her encountering the broken and mangled corpse of Hanna Grace. Following her police instincts, Megan tries to find out more about the corpse, how the murder happened, and what is now making some strange things happen in the morgue.

Capably directed by Diederik Van Rooijen, who seems to have a solid filmography full of movies I haven't yet seen, the big surprise here is the fact that the script is written by Brian Sieve. Sieve gave us Boogeyman 2, Boogeyman 3, and a fair chunk of Scream: The TV Series. None of those projects are a really good time for horror fans, so I think it's fair to say that this stands out as his best work yet. The plotting keeps developing little details nicely, even if things go from zero to insanity very quickly, the flawed central character is a good one to root for, and there are a number of enjoyable death scenes that turn supporting characters into broken bodies.

Mitchell is very good in her role, a damaged individual with a core of strength that remains, despite her moments of weakness. Louis Herthum is a man with inside knowledge of the corpse (played by Kirby Johnson, and I don't want to dismiss her performance, even if her character spends most of her time on a morgue table), and Grey Damon, Nick Thune, Stana Katic, and Maximillian McNamara all work well in their roles.

There are things the movie doesn't get right, particularly in ramping up the pure horror aspects while a number of other people have to avoid seeing anything that our lead ends up seeing, but these are minor complaints. Even the lack of any real stylistic flourishes doesn't matter too much. This is a film that gets the basics right, and getting the basics right, before adding some extra touches to them, puts any horror movie ahead of the hundreds made by people who seem to completely misunderstand the genre. The scares here are crafted expertly, the setting makes it easier to accept the relative lack of people and activity, and everything builds to an unsurprising, but very satisfying, ending. 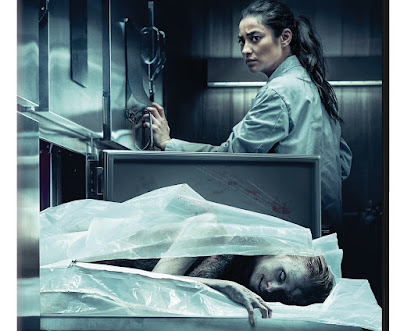