The last film I saw from director Nicholas Verso was the atmospheric horror-tinged drama Boys In The Trees. Toys Of Terror is quite a step away from that, although it shows Verso once again happy to deliver a movie without easy labels.

At the very basic level, Toys Of Terror is a film summed up by the title. A family move in to a large house. There are parents, three children (one a teen and two younger kids), and a nanny. And there is a big chest that is found to be full of toys. Those toys are livelier than most, and quite deadly.

It isn’t a great movie, marred by some uneven CGI and occasional moments that are simply bizarre, but Toys Of Terror somehow uses everything onscreen to its advantage. That uneven CGI makes it feel like a “little film that could”, while the more bizarre moments show that those involved are happy to acknowledge the influences from both the world of horror and the world of Christmas tales (there’s definitely a hint of Rankin/Bass in the mix).

The script by Dana Gould is worthless when it comes to most of the dialogue, but shines in the more creative moments. It is also impressive for being enjoyably playful and often showing things as they would best appear to children. Take Dolls, Krampus, Child’s Play, and The Orphanage, throw them into a blender, and flick the switch, and here is your end result.

Unfortunately, Verso doesn’t have quite the grasp on the material as he had on his previous film. That doesn’t mean he fails in his directorial duties, it just means that things tend to bump from one sequence to the next, rather than flow smoothly throughout. Again, that slightly adds to the charm, even as viewers may be baffles by some of the more surreal scenes.

Kyana Teresa and Dayo Ade are fine in the role of the parents, and Verity Marks is good as a plucky teen that you can root for, but I was personally most taken with Georgia Waters, playing the nanny, an actress not entirely unlike Jessica Chastain in looks and mannerisms, but obviously less precious about the kind of film roles she takes. And good for her. Saul Elias and Zoe Fish are the younger children, and both do a good job of becoming sullen and influenced by the house/toys.

If you get to the end of Toys Of Terror and end up disappointed by what was in the film then it's ultimately on you. The film hasn't hidden what it is, from the title to the trailer, and it's perfectly enjoyable for those in the right mood. Will you revisit it? Will it be one remembered years down the line? I doubt it, but it's a passable distraction nonetheless. 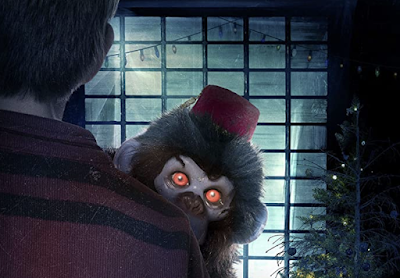