I've said it before and I'll say it again, The Hudsucker Proxy is the best film that the Coen brothers have made. Yes. Re-read that sentence, accept that I am not going to change my mind, and let's now move on to the full review.

Hudsucker Industries is about to experience a turbulent time. The president (Charles Durning) has left the building via a very high window and it is only a month until the stocks are going to be made available to the company. So Sidney J. Mussburger (Paul Newman) comes up with a plan. Put someone in place who will cause the value of the company to plummet, allowing the board to buy up the shares and then get things back on track, making lots and lots of money and ensuring they also keep control. This works out well for Norville Barnes (Tim Robbins), a wet-behind-the-ears young man who has landed a job in the mailroom, but he obviously doesn't realise that he is being used as a patsy. He has one big idea, and one potential ally (Jennifer Jason Leigh, portraying a Pulitzer-winning reporter named Amy Archer, getting her story by working undercover for Norville). Can he somehow survive his express trip to the top of the company food chain?

Written and directed by both Coen brothers (with Sam Raimi helping out in the script department), I really do view this as a perfect movie, and it's most certainly the best cinematic ode to the many films of Capra that we've had in modern cinema. The script alternates between biting and beautifully gentle, there are some standout set-pieces (the main one being a child finally seeing the potential of a lone hula hoop), and the cast are faultless throughout.

The first time I watched this movie I was irritated by Leigh, but when I revisited it I saw that she delivers a performance that rivals those she was tasked to emulate (Hepburn clearly being the main influence). Robbins, on the other hand, gets to play his everyman in a broad, wide-eyed, way, allowing him to draw more comedy out of the material. Newman has a blast, a big grin one minute and a menacing glare the next, and there are equally wonderful turns from John Mahoney, Bruce Campbell, Bill Cobbs, Jim True, and the ill-fated Durning.

And all of those pitch-perfect performances are delivered in the midst of a film that feels like it could have been made in the 1950s and colorised for modern audiences. Every detail, from the layout of the Hudsucker building to the music (a fitting accompaniment to the visual style from Carter Burwell), to the main idea that the whole plot revolves around, no pun intended. Clean, crisp, yet warm, cinematography from Roger Deakins, a master of the craft, editing that veers between sedate and snappy, as required, and even the selection of well-utilised special effects are beyond reproach, in my eyes.

I may have misspoke when I said that this was the best film that the Coen brothers ever made. The more I think about it, the more I think I should just call it what it is; a modern masterpiece. Yes. And you're still not going to change my mind. Well, not until I have a long-overdue rewatch of Miller's Crossing anyway.

This says that it is UK compatible.
Americans can buy it here. 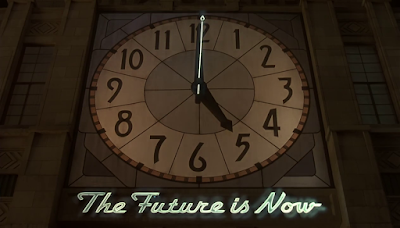