There are two things associated with this latest working of the Candyman mythos that can provide a lot of irritation and/or amusement. First, the amount of people that keep referring to it as a bloody Jordan Peele film, when it was directed by, and co-written by Nia DaCosta (ironically . . . say her name, and remember it). Peele also worked on the screenplay, and his name as producer most probably helped the studio get behind this, but the ignorance/laziness of people wrongly crediting Peele, whether they love or hate the movie, is astonishing. Not the first time, of course (remember "Eli Roth's" Aftershock, or poor Henry Selick so often being forgotten as the actual director of The Nightmare Before Christmas?), and it won't be the last, but if the past few years have taught us anything it is, surely, the importance of correcting inaccuracies and misinformation. The other main thing that you should choose to just roll your eyes it, well, it's the amount of people complaining about the content of this film, either trying to call it racist, or complaining about it being "too woke", as if the original films weren't exploring the racially-charged mistreatment and abuse of a black man, the social climate and systemic issues that bundled African Americans together in one small area where they could be left to their own devices, gentrification, and the power that can be gained by examining something in the open that has been left to fester for so long behind closed doors.

Anyway, let's get to the film itself, a continuation of the story delivered to audiences in the original film. This time the main characters are an artist, Anthony McCoy (Yahya Abdul-Mateen II), and his successful partner, Brianna (Teyonah Parris). Struggling to find his way back to anything like his previous form, to put it mildly, Anthony finds his imagination fired up when he bumps into William Burke (Colman Domingo), a man who confirms the tale of Candyman, and the subsequent incident that ended with a stolen baby being returned and the fiery death of Helen Lyle. Anthony creates a new selection of work, based around the phrase "say his name", and starts a chain of events that could drastically affect his future, while also forcing him to find out a bit more about his past.

From the very first seconds of Candyman starting, the focus of this film is crystal clear. Much like the first film, it's about exposing something that has been kept in the dark for too long. This is the perfect way to craft a sequel to a well-loved modern horror classic, despite the fact that some people will just want more of the thing they enjoyed most the first time around. You still have commentary on gentrification, you still have the amusing dissection of art and culture from people acting smug and superior while living outwith the main sphere of influence that helped to create that art and culture, and you have a study of an urban legend, and how it can be reshaped and turned into something better or worse over time. You also get a look at the ongoing problem of police brutality, something strongly underlined by the whole "say his name" mantra that runs through the whole film.

DaCosta doesn't go for many easy scares, but they're very well done when she does. She instead creates a growing atmosphere of unease, emulating the original film with a blend of fear of the boogeyman and fear of very real problems afflicting some of the main characters. The script, co-written by herself, Peele, and Win Rosenfeld, is smart, layered, and pretty much a textbook example of how to respect an original work while not feeling the need to slavishly replicate everything it did. There are mirrors, and other reflective surfaces, everywhere, and so many shots are framed to allow viewers to consider everywhere a danger could be lurking.

Abdul-Mateen II is a fantastic lead, someone charismatic enough to make it easier to stick alongside him as his journey takes him further and further away from the person he once was, and Parris does well with a character who is allowed to react naturally to someone who changed into what could be a very dangerous presence. Domingo is fine, but ends up overacting slightly in the third act, and Vanessa Williams reprises her role from the 1992 film. Nathan Stewart-Jarrett and Kyle Kaminsky help to lighten things up a bit, playing Brianna's brother, Troy, and his boyfriend, Grady, respectively. Brian King, Miriam Moss, and Rebecca Spence play people who may well say "Candyman" five times while looking in a mirror, and the inclusion of Tony Todd will surely keep fans happy.

Is it a flawless masterpiece? As is the case with the majority of movies released throughout time, no. But it's easily one of the best mainstream horror movies I can think of in recent years, and it's a thought-provoking, and often beautiful (I didn't even mention the backstories told in shadow puppet form), piece of work. It also doesn't forget that people will want a hook-handed "boogeyman" to turn some victims into a mass of blood and gore. I would definitely be interested in seeing what could happen in a sequel to this, and I am very keen to see what comes next from DaCosta (say her name). 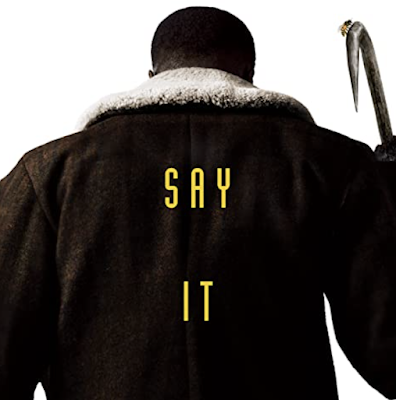