I am sure I am repeating myself here, but if you were there when VHS changed the world of home entertainment then you will always have a number of films that you think you saw without actually seeing them. Because the trailer seemed to be on every bloody horror movie that was rented in the early 1980s. The main ones I recall were The Dunwich Horror, Superstition, Necromancy (a trailer boosted by the extra baritone provided by the mighty Orson Welles whenever he was shown), and Death Ship. It took me far too long to check out these movies, having assumed I'd already seen them, but I'd advise anyone seeking them out to try and consider them within the context of those well-remembered days of top-loading VCRs, tracking dials being adjusted, and people who had a collection of home recordings housed in covers that were designed to look like leather-bound books.

I'm saying that now because Death Ship isn't that good, but it also has enough moments throughout that remind me of the trailer to keep me happy. The basic plot revolves around a cruise ship being rammed by a big, scary freighter. A few people stuck in a lifeboat are relieved when they encounter a big boat that they can climb aboard, unaware that it is the very same freighter that put them into the sea. Once aboard, it's soon obvious that strange things are afoot. All of the WWII Nazi regalia is a bit unnerving, as well as the fact that there seems to be no crew. That could all change soon though, especially as unhinged Captain Ashland (George Kennedy) starts to feel more and more connected to the ship.

Directed by Alvin Rakoff, who has a hell of a lot of TV and film credits to his name (but this remains arguably his best-known work), Death Ship is a competent and atmospheric horror that I'd love to see get the remake treatment today. The actual ship is the star of the show, and there are lots of shots here that simply show various parts of the structure, be it corridors or chains and fittings, with a menacing score letting you know that every inch of it could be dangerous. The screenplay by John Robins may not work as well as it could, but it takes some time in the opening section to introduce the characters that will be dragged through the madness of the rest of the movie. It's just a shame that nobody was more creative and daring when it came to the death scenes here. Some memorable gore could have made this one an absolute corker.

Kennedy is a lot of fun in his role, throwing subtlety to the wind as his character develops from a tetchy and paranoid Captain to a . . . tetchy and paranoid Captain who would like to kill people. Richard Crenna is the new Captain, Trevor Marshall, who puts Kennedy's character out of sorts from the very beginning, and he tries his best to play the hero role, although the film continually moves back to focus on the ship itself, and Kennedy's kinship with it. Victoria Burgoyne has a memorable shower scene (no, not for the reason you may be thinking), Saul Rubinek is the light entertainment man on the cruise ship who proves less entertaining on the "death ship", and Sally Ann Howes, Jennifer McKinney, and Danny Higham make up the wife and children, respectively, of Crenna's character. Howes is fine, the children are just a bit too annoying.

There's enough here to make Death Ship an enjoyable horror movie, and the details littered throughout are interesting and unsettling, but it's a shame that it couldn't have made the most of the concept. Add some disposable teens to bulk out the cast of characters, and some more fantastical deaths, and it would be an easy one to recommend. As things are, one to watch if you have the fondness for the trailer that I did. 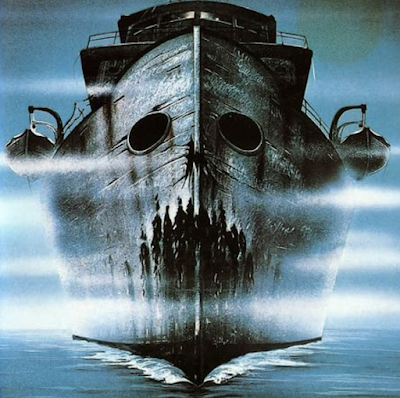