I left it too long to watch The Silence, but also maybe didn’t leave it long enough. Because this is a movie I could quite happily have gone through my life without seeing. The main draw for me was Stanley Tucci (damn you, Tucci), and he once again does great work, despite this being one of the worst movies he has starred in.

Some pesky people break through into a cavern, unleashing a flock of creatures that go on to cause havoc and carnage in our world. The creatures are like man-eating bats, and they react to sound. That should be okay for the Andrews family (headed up by Hugh, played by Tucci). The Andrews family have been learning sign language since their daughter, Ally (Kiernan Shipka), lost her hearing in a bad accident. Everything quickly goes from zero to the collapse of society, and you also get a cult (led by a preacher, played in full creep mode by Billy MacLellan).

Directed by John R. Leonetti (responsible for such masterpieces as . . . Mortal Kombat: Annihilation, The Butterfly Effect 3, and Wish Upon, ALL films I enjoyed more than this), The Silence is one of those movies completely hampered by the contrivances thrown into the plot. That might have something to do with the script, written by Shane and Carey Van Dyke (names I know from their work with The Asylum, as well as them being part of the Van Dyke family, and they also wrote Wish Upon). It’s uniformly terrible, from the depiction of the main characters to all of the plotting that puts them in increasingly deeper peril.

Tucci, as mentioned, is great, and there aren’t too many reasons to complain about Shipka, MacLellan, Miranda Otto (playing the mother of the family unit), or anyone else involved. In fact, a lesser cast would make this much more painful.

There are so many things here that don’t make sense, from the spiralling devolution of society to the fact that so many characters opt to use sign language and still speak some of the words, albeit at a low volume, at a time when silence is the most important thing. I was so irked that I even disagreed with Shipka having to deliver dialogue explaining how she has learned to live in silence, and therefore being equipped to deal with the current circumstances. She has had to adapt to a loss of hearing, which is actually no help at a time when you need to be wary of every noise that you might make.

The premise could have worked, if the writers had put a lot more effort in, and the director had better material to work with, but this isn’t anywhere near being the best way to make a movie around the core idea. Supporting characters don’t make much of an impression, the set-pieces are clumsy and ineffective, and none of the main acts have even one highlight (the beginning is flat, the middle is infuriating, the end is laughable at times).

The saying goes that if you don’t have anything nice to say then you should just say nothing. I still really like Tucci. Unfortunately, that may be the only good thing I have to say about this. 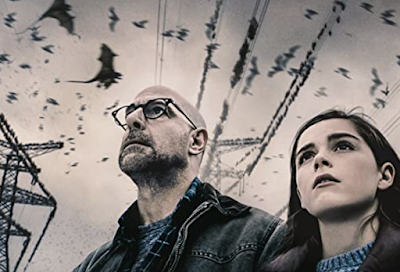