If you have fallen in love with any major blockbuster movie from the past four or five decades then you have probably appreciated the work of Phil Tippet. He is a special effects master, known especially for his superlative stop-motion animation. If you've watched Star Wars movies, Indiana Jones films, Starship Troopers, Jurassic Park, Robocop (he animated ED-209), or even Honey, I Shrunk The Kids, to name just a few, then you have seen Tippet's work.

Mad God is an animated feature, largely utilising stop-motion, that Tippet has been working on for many years, a dark sci-fi epic displaying epic vision while relishing so many tiny details.

The plot is fairly simple, initially. A character descends in a diving bell to explore some dangerous and fantastical lands. Things get darker with his every step, viewing the strange creatures around him and observing some of their bizarre, and sometimes stomach-churning, activities.

There are a few actors used here, with director Alex Cox being the main one, but 99% of the characters onscreen here are created by Tippet and his talented team. And 99% of those creations are imaginatively grotesque, in terms of their physicality and how they spend their time. Think of diving down further and further into some incredibly deep underwater abyss, a place where the creatures are affected by the pressure and the darkness, and you will have some idea of what kind of experience Mad God provides. The closest comparison point might be the works of Jan Švankmajer.

There’s a lot more to it though, this is more than just a fantastical travelogue, but I am not going to pretend that I connected every single dot. A central plot point concerns a bloody medical procedure, and a baby being born, but I had already accepted the fact that I was just going to sit back and take in the minutia of this wild world being put on display.

It may be an indulgent project, and Tippet needed help from many fans to find the final vision, but sometimes allowing an artist to be indulgent is incredibly rewarding. It is art for the sake of art, visions created just because someone imagined them and felt an overwhelming need to turn them into a reality. There may be a mad god within the movie, or maybe not, but it is obvious that the title of this movie refers to Tippet himself. Someone who can build or destroy lives and worlds as he pleases. And there will be many film fans as ready to worship at the altar of Tippet as I was. You may not completely enjoy being thrown into his world, but you’re certainly unlikely to forget it. 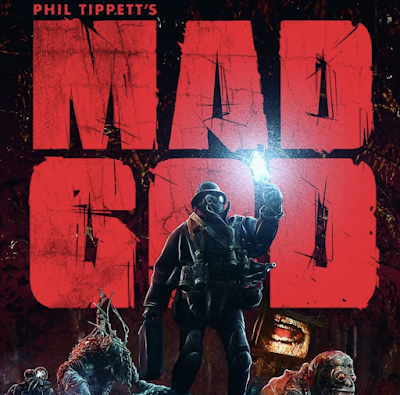