There's an extra factor at play here, something that makes The Suicide Squad feel like it deserves to be relished more than perhaps any previous superhero movie within the recent selection of DC adventures. Because writer-director James Gunn got this gig after some idiot attempted to lose him work with Marvel/Disney, which temporarily worked, allowing him to deliver this film . . . before returning to Marvel/Disney for the third Guardians Of The Galaxy movie. So thanks to that idiot, with a name I have already forgotten, for allowing us to receive even more fun from Gunn.

The plot is relatively simple. A squad is assembled for a mission that doesn't seem to have much chance for survival. That squad includes Harley Quinn (Margot Robbie), Bloodsport (Idris Elba), Peacemaker (John Cena), Ratcatcher (Daniela Melchior), King Shark (voiced by Sylvester Stallone), Polka-Dot Man (David Dastmalchian), and one or two others. They wade into the hostile territory of Corto Maltese, where they end up plotting to apprehend an important figure named Thinker (Peter Capaldi).

If there's one word you could use to describe The Suicide Squad it's gleeful. Gunn gleefully throws around bucket-loads of blood and gore, mixing laughs in with the action to provide the most twisted and anarchic superhero film since, well, Super. Strangely enough, that sense of anarchy still manages to feel very calculated and formulaic. The film is wild fun when compared to other movies within this subgenre, but it's not all that surprising when you know the kind of film it is aiming to be, and Gunn makes that pretty clear from the opening sequence (with great use of the song "People Who Died", by the Jim Carroll Band). Thankfully, the set-pieces are entertaining enough to keep your spirits high, and there are also one or two moments that allow viewers to remember that Gunn is good at giving his high-budget fare a good bit of heart and soul.

Robbie remains arguably the most valuable jewel in the crown of this movie universe, and is once again excellent, while Elba makes effortless cool again look . . . effortlessly cool. Cena is a lot of fun in his role, Melchior and Dastmalchian are both wonderful, and Stallone's vocal work is a lot of fun. But it would be very easy to criticise these characters for obvious parallels, considering the direction from Gunn. King Shark may have more words in his vocabulary, but feels quite Groot-ish, and Cena is as humourless as Drax. Consider Harley Quinn as an equal to Rocket, and that just leaves you wondering whether Elba would be Peter Quill or Gamora. It might seem unfair to think of those comparisons while the film is on, but Gunn practically invites them by the fact that he seems to be drawn to the same kind of ragtag bunch of lovable rogues.

Each main act here has enough inventiveness and energy to blow away that feeling of over-saturation that many film fans have been experiencing lately. Superhero movies aren't going away any time soon, but that's not a problem when we get some more variety from the films being released. And if that variety sometimes comes from focusing on "the villains" then all the better, because I enjoyed this more than I enjoyed Suicide Squad. And I liked Suicide Squad well enough. 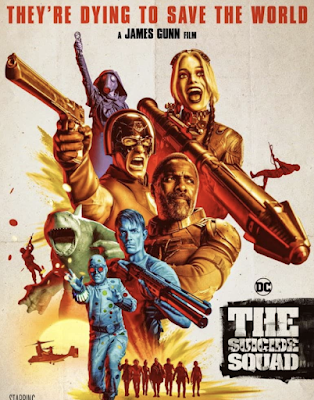