Another Ryan Reynolds comedy, another film benefiting from his voiceover narration (which seems to be the best way to utilise his onscreen presence), and another film allowing him to retain his current status as someone we can all collectively love for a variety of reasons, Free Guy also stands out from the crowd nowadays, much like the worthwhile Ted Lasso, by simply celebrating the benefits of being good. It celebrates the ability to be a nice person, even as the world around you tries to make you feel like a weakling for showing even a hint of kindness at times.

Reynolds plays Guy, a NPC in a videogame that doesn’t feel a million miles removed from Grand Theft Auto. The videogame may have been built using code created by Millie (Jodie Comer) and Keys (Joe Keery), and Millie spends as much time as possible within the game trying to find any sign of their old code, in an attempt to sue the rich and powerful head of Soonami Studios, Antwan. Guy has spent a lot of time just enjoying his days, working in a bank that is often robbed, and enjoying the company of his best friend, Buddy (Lil Rel Howery), but spying Millie AKA the woman he loves spurs him to take on a very different persona. Guy starts to level up, and he does it by doing good deeds, as opposed to the approach of robbing and shooting stuff that most players opt for.

Written by Matt Lieberman and Zak Penn (a great mix of family-friendly tone from the former throughout and the layered, referential, work that the latter has done a few times before), a lot of people have been busy finding comparisons between this movie and the likes of TRON and Ready Player One. While I can see those comparisons, Free Guy is actually more of a mix of The LEGO Movie and Wreck-It Ralph, with a hint of They Live in there (Guy sees the missions and extras around him when he puts on sunglasses that are usually only worn by player characters).

Director Shawn Levy is a dependable pair of hands, working with a team to create an interpretation of an online gaming world that crams in plenty of fun, in terms of the characters, the dialogue, and overall design of every scene. This is a film that will reward a number of repeat viewings, and Levy maintains a nice balance between the deceptively simple heart of the whole thing and the cavalcade of wonderful details throughout.

Reynolds is excellent in the lead role, very likeable and dialling down his standard smart-ass sassiness. Comer pairs up with him perfectly, being a skilled and tough woman always moving forward with a very specific aim. The chemistry between the two leads is almost perfect, all the way to a finale that manages to pull off what I thought was going to be the biggest hurdle, a truly satisfying ending. Keery gives good support, eventually helping Comer when he sees her getting tantalisingly close to finding the code, and Utkarsh Ambudkar is a lot of fun as Kerry’s colleague/friend who keeps trying to advise him to not rock the boat. Howery is wonderfully exuberant and sweet, Channing Tatum has a fun cameo role (and there are a few others to keep your eyes/ears peeled for), and Waititi seems to relish playing his douchebag character at a level of maximum douchebaggery.

The only thing working against Free Guy is a sense of familiarity as the videogame tropes are set up and played around with. But that’s not enough to drag it down much. As things stand, this is so far the best big cinema release of 2021, and I recommend it to pretty much everyone, but especially those who enjoy the two main animated movies that I mentioned earlier. 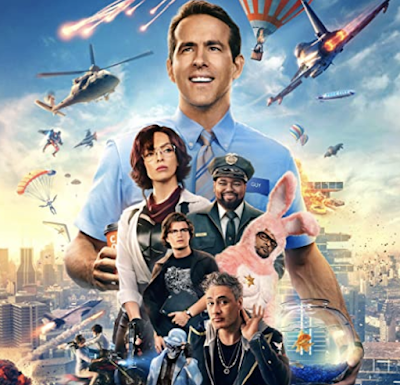