You would, I think it is safe to say, be hard pushed to find someone who really LOVED The Hitman's Bodyguard, an action comedy that starred Ryan Reynolds and Samuel L. Jackson alongside one another. It was decidedly okay, but below average for that kind of fare. The action wasn't great, the comedy was far too reliant on one of the lead actors swearing, and it just felt a bit careless. BUT you did have the charisma of both Reynolds and Jackson, and a small role for Salma Hayek.

And now, bewilderingly, we have a sequel. Reynolds is back, Jackson is back, Hayek has a bigger role (being the titular hitman's wife), and you also get some screentime for both Antonio Banderas and Morgan Freeman.

Here's the basic plot summary. Michael Bryce (Reynolds) is upset at the fact that he has lost his licence to bodyguard. Attending therapy, he is encouraged to try and relax for a while, keep away from guns and violence. It's during some relaxation time that he is dragged into action by Sonia Kincaid (Hayek), who believes that he is the only person her husband, Darius (Jackson), trusts to get him out of a very tricky situation. Unfortunately, Darius had been trying to tell his wife that she should ask for help from . . . anyone but Bryce. Banderas plays Aristotle Papdopolous, a dangerous man with a dangerous plan involving a major cybercrime, and Morgan Freeman allows the film to explore some amusing daddy issues.

Director Patrick Hughes returns, taking no time at all to reassure viewers that they will be getting exactly whatever it is they enjoyed the first time around. Yes, there may be a few more big names in the main roles here, but the format is very much the same as it was before. Bullets and cursewords fly around each act, neither of them as amusing as they're intended to be. Just keep reminding yourself that there was a time when Hughes made a brilliant impact on the cinematic landscape with his superb feature debut, Red Hill, and maybe one day he will find his way back to that kind of brilliance.

It's no surprise to find that the screenwriters, brothers Phillip and Brandon Murphy, are first-timers, and I can imagine a bit of improvising may have been encouraged, certainly between the three leads. The dialogue throughout is pretty poor, in between gags of varying quality, and the plotting is as predictable as you might expect from something like this.

The leads do lift the material though, just not enough to make this a good film. Reynolds and Jackson once again spark off each other brilliantly, and Hayek is a lot of fun as the fiery Sonia. Banderas is typically suave, Freeman is a fun choice for his role, and there's some time to include the likes of Frank Grillo (an Interpol agent), Richard E. Grant (a drug addict who used to be under the protection of Bryce), and Tom Hopper (a top bodyguard). Caroline Goodall plays another agent, with her scenes generally made more amusing thanks to her main colleague being played by Alice McMillan, confusing some people around her with her strong Scottish accent.

I've not watch The Hitman's Bodyguard in a couple of years, because I've never felt the urge to revisit it, but this sequel feels like a lazy retread. Which means I am sure enough people will enjoy it to somehow make a third movie viable. And that's making me feel grumpier already. That's never a good way to feel after reviewing a comedy film. 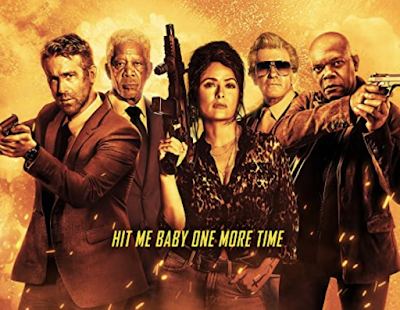