Virginie Efira plays Sybil, a psychotherapist who decides that she wants to pursue her love of writing. She drops all of her patients, hoping to give her full time and attention to her craft, but is then called by Margot (Adèle Exarchopoulos). Margot is a young actress who has had an affair with her latest co-star, Igor (Gaspard Ulliel), a man who happens to be the husband of the director, Mika (Sandra Hüller). Not only has she had that affair, Margot is also pregnant, which means she is contemplating an abortion when she first talks to Sybil. Drawn into this complex and dramatic situation, Sybil starts to incorporate elements of Margot's life into her writing, and she also allows herself the opportunity to creep into a very different world, one in which the line between reality and fiction is as blurred as her own view of the world around her.

A fascinating look at some very interesting ideas, Sybil marries a great script, co-written by director Justine Triet and Arthur Hararai, with a cast all very much capable of doing their best in the roles they have been given. What could have been filtered a number of different ways, the same material could have been a standard melodrama or even a glossy psycho-thriller, has been crafted into a near-flawless character study that has characters often so confused with their own choices and mindsets that viewers take an extra step or two to realise when things are sliding horribly, and inexorably, in the wrong direction for them.

Triet directs with an approach that brings viewers as close as possible to the two main leads (Efira and Exarchopoulos) and has us wanting to protect them from themselves, whether the pain comes from their own actions or the reactions of others. The moments of fantasy feel very easily identified during the earlier scenes, but it becomes harder and harder to figure out what is real and what isn't as we get closer to the very end of the film.

Efira is excellent, as authoritative and poised as she needs to be for many scenes before slowly and surely losing some control, and Exarchopoulos is equally good, portraying someone more naive and more used to delving in and out of scenarios that are complete fantasy. Ulliel does fine in his role, although his role ensures that he's the one main character who is easiest to dislike, or at least not care about, and Hüller excels as the angry director/hurt woman who is in some ways working opposite Sybil for the ability to ultimately control Margot for a short space of time. There are some other people around this selection of characters, and everyone does a good job in their roles, but it's this quartet that remains the focus throughout. 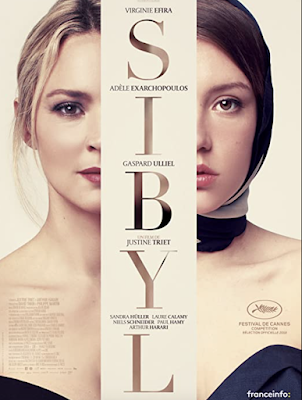