We really need more films from director Joe Carnahan, because I cannot think of anything from him that I have disliked. He may not aim for subtlety (although more people also need to watch the excellent Narc), but that’s no bad thing when you get such inventive ways to use and remix standard action movie tropes.

Boss Level is, essentially, a timeloop movie. Written some years ago by Chris and Eddie Borey, and then rewritten by Carnahan, it is the story of Roy (Frank Grillo), a man unexpectedly reliving the same day over and over again. And that day is the day he dies, for reasons he is unaware of. As the plot develops, Roy starts to piece together a bigger picture, an actual explanation for his dilemma, and there may be a slim chance to eventually break the cycle. Roy certainly has the skills, being your typically talented ex-special forces type, but the odds are very much stacked against him, with the sheer number and variety of killers aiming to end his life. He also wants to ensure that his son (played by his real son, Rio Grillo) is safe, and maybe even hopes to avenge the death of his ex-wife, Jemma (Naomi Watts) when he starts to suspect that she wasn’t involved in the fatal accident he was told about by her boss, Col. Clive Ventor (Mel Gibson).

Starting right in the midst of an action moment that shows viewers how well Roy knows the routine of his day, Boss Level soon shows that it is made by someone who wants to maximise the potential fun of the premise. Roy dies in a variety of ways, and there’s usually a mix of gore and humour in every death scene, as he makes a number of mistakes on his journey. That’s okay though, because many of his mistakes provide an important learning moment.

Unlike many other timeloop movies, Boss Level minimises the timestamp details. Rather than specific repeated moments, although one or two do stay the same, we get shown the shape of a day, and that shape changes, and extends, as Roy learns more and more, and adapts his strategy accordingly. Some days he just wants to reach a diner and get drunk (with Ken Jeong playing the boss there, and Sheaun McKinney playing a fellow patron who happens to have a useful knowledge base), some days he battles villains until eventually (inevitably?) being bettered, and some days he just decides to take some time to connect with his son.

Grillo is perfect in the lead role here. He has a morbid sense of humour, an understandably flexible grip on his sanity, and a convincing physical presence. He also has a sense of pure grit. Jeong and McKinney are both fun, and the early appearance of Michelle Yeoh, as another diner patron, bodes well for fans who want to see a bit more of her later in the film. You do get that, but it’s sadly only a minute or two. Gibson is an enjoyable big villain, allowing himself a moment or two to deliver some great dialogue when people are right where he wants them, and Will Sasso is a solid henchman. The other highlight is Selina Lo, a sword expert who delivers a fun signature line every time she kills off our hero. Young Rio Grillo and Naomi Watts are involved in the moments that give the film some real heart, and both do well in roles that could have been totally thankless.

I heard the premise of this movie and thought it sounded great, but it also sounded as if it could be very silly, in a way that would make it hard to care about. It IS silly, but in a way that just helps you warm to the main character, and it turns into something more interesting, and deeper, than you might expect. It’s not exactly Kramer Vs. Kramer with added timeloop shenanigans and gunfights, but it’s quite a bit more than the opening act sets it up to be.

Another winner from Carnahan, and I eagerly await whatever he does next. Maybe I will just watch this one repeatedly until then. 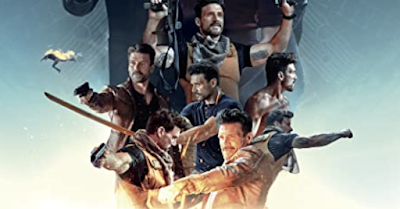