Warning - I wouldn't consider the following information spoilers, BUT I would advise that it is best to go into Black Bear completely blind. So please do yourself a favour, avoid any reviews of the film until you've seen it for yourself.

The second full feature from writer-director Lawrence Michael Levine, Black Bear starts off feeling like something very familiar - a filmmaker (Aubrey Plaza) is welcomed as a guest into the home of a couple with a strained relationship (played by Christopher Abbott and Sarah Gadon). Snippy conversation turns increasingly sour as tension rises. You've seen moments onscreen that explore that kind of atmosphere before. But then things change. A second part presents the actors given different roles, and viewers are now looking at the actual act of creating a fictional piece akin to what we've just been watching. And this is where things really start to get interesting.

Although I appreciate that I didn't know what Black Bear was going to be about, I think I would have enjoyed it even more if I'd been aware of the structural upheaval that was coming along after the first main section. The constant sense of discomfort and unease had me feeling that the film would become a tiresome experience. Thankfully, the big shift in focus makes everything so much better, including what you've just been watching.

Although they take on different roles within each main story segment, Plaza, Abbott, and Gadon are consistently excellent. Plaza is especially impressive in a role that feels more removed from the kind of thing she's done before (and the casting initially, and cannily, allows her to first embody exactly the sort of thing we've seen her do so often already), and both Abbott and Gadon are happy to play characters with layers of deviousness and unpleasantness to them.

Apparently based on some of Levine's dreams, what you get here is a thought-provoking look at just how far some people go to produce a performance from actors, and how manipulative that process can be. You can equate that with any of the more innocuous moments you may have heard of - such as Wes Craven helping Drew Barrymore to act upset by reminding her of stories of animal cruelty - or you can easily consider onscreen performances that came from much more difficult, and problematic, circumstances. The most egregious example of this, in my view, would be some of the work of Bernardo Bertolucci and Alejandro Jodorowsky - men who have delivered some amazing art, but at what cost to women being directed by them.

A film that works well for the actors, as well as being ABOUT actors, Black Bear also explores gaslighting, consent, and abuse. There are toxic relationships on display, as well as toxic environments. Perhaps it's all a very clear analogy for sexual abuse, or perhaps, even more disturbingly for us film fans, it's a damning indictment of methods that are used far too often on film sets where the person in creative control gets to do whatever he (and it's invariably a male in such cases) damn well pleases. 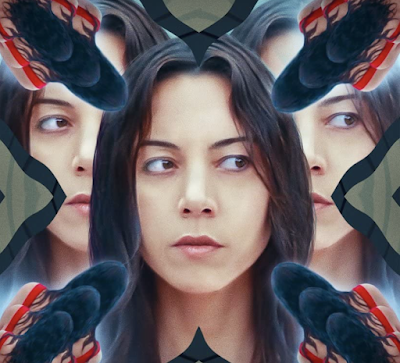