A rather simple tale of the rise (and fall?) of someone who ends up pushed around by many people until he turns to a life of crime, The Harder They Come is a landmark film for a couple of reasons. First of all, it was the first hit movie to come from Jamaica, as far as I can tell. Secondly, the soundtrack is full of what you might want to call "absolute belters".

Jimmy Cliff plays Ivan, a young man who returns home to his home in Jamaica with the hope of becoming a successful Reggae singer. He gets a job to tide him over in the meantime, and also makes time for the company of a lady who has caught his eye (Elsa, played by Janet Bartley). Things soon take a turn for the worse, leading to a crime that is punished with a harsh whipping, and then Ivan becomes more and more determined to record and release a song, "The Harder They Come". In typical producer fashion, apparently, the producer stiffs Ivan out of any chance to make some decent money, and this leads to the next main chapter in his life, a drug-running career that gets him into more and more trouble. That's not bad for the record producer though, who keeps making money from Ivan's song as he promotes it with the image of Ivan as an anti-authoritarian "gangster" on the run.

When you look at the actual film-making here, specifically the direction from Perry Henzell (who also co-wrote the screenplay with Trevor D. Rhone), there's not much to recommend The Harder They Come. It feels rough and very simplistic, in many ways, but that's also part of the charm, the way it is presented as if the screen between viewers and the lead character is thinner than it usually is. Ivan is shown at one point enjoying Django in the cinema, and you know that a lot of his spontaneous actions feel informed by his imagined creation of the kind of character he would enjoy watching in a movie, which is the character we end up enjoying watching in this movie. Whether deliberate or accidental, I really can't tell, it's a nice bit of characterisation that brings up parallels, as well as highlighting major differences between fiction and reality.

Cliff is decent enough in the man role, with the big plus being his vocal talent. Bartley is fine, but stuck with simply being there to cave in to the charms of Cliff, while there are decent turns from Carl Bradshaw, Ras Daniel Hartman, Basil Keane (an intimidating preacher), and Winston Stona. Everyone may feel a bit awkward and stilted at times, but they're essentially there to simply support the real star of the show, the soundtrack, which includes the title track, "You Can Get It If You Really Want", "Pressure Drop", and "Many Rivers To Cross", as well as a few other greats.

I may have enabled the subtitles, to make sure I could understand everything being said, but you can make a personal choice on that front, depending on how quickly you find yourself able to get the gist of the words being spoken in the Jamaican Patois. Let's face it though, this isn't about catching every syllable. The dialogue and plot aren't very complex, and the strong accent has a certain lyrical quality that winds nicely in and out of the soundtrack choices. 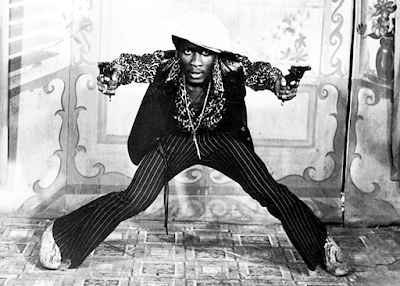