Look, not every film based on a Disney attraction is going to work. Just see The Haunted Mansion (or don't . . . I didn't hate that film and even I just rated it a 4/10). But the fact that it can work as well as it did with Pirates Of The Caribbean is probably good enough reason for film-makers to see what else they could adapt into a fun movie/franchise. And Jungle Cruise is definitely more in line with the latter than the former. It also has a very similar vibe to Fraser/Weisz The Mummy movies (no bad thing). And benefits from the absolute maelstrom of charisma that is Dwayne Johnson.

Emily Blunt plays Lily Houghton, a daring young woman who is determined to find a fabled tree that has leaves said to be able to cure illnesses. Having upset the proper establishment that doesn't believe in such things, and certainly won't accept such ideas coming from A WOMAN (this is the early 1900s, after all), Lily steals an arrowhead that may help her locate the tree, rushing off on an adventure with her brother, MacGregor (Jack Whitehall). The two get to South America, where they end up hiring a boat captained by Frank Wolff (Johnson). Danger lurks under every ripple of the river water, especially when they are being pursued by an obsessed and amoral German, Prince Joachim (Jesse Plemons), who also wants to find the tree. Oh, there are also some undead conquistadors (led by Aguirre, played by Édgar Ramirez) who want a chance to lift the curse placed upon them.

Jungle Cruise works as well as it does thanks to the wonderful interplay between Johnson, Blunt, and Whitehall. All three get a chance to show their comedic chops, and all three get to have at least one moment in which they show the real strength of their characters. Johnson gets to reel off a number of amusingly bad puns (the kind I always enjoy), and he's also a bit of a con artist, while Blunt has an impressively pro-active and savvy approach to her quest, even if she is given extra assistance from Johnson on a couple of occasions. There has been some praise for the fact that Whitehall's character is a young gay man in a Disney movie, but the House Of Mouse yet again make the minimum effort to show that they nowadays realise what a wonderful variety of human beings are out in the world.

The screenplay throws together Michael Green (who has worked on films such as Logan, Green Lantern, and Murder On The Orient Express) and Glenn Ficarra and John Requa (responsible for writing Cats & Dogs and, ummmm, Bad Santa). That mix ends up yielding a surprisingly cohesive result, with all three men obviously doing their best to please their Disney bosses, helped in developing the theme park ride into a movie idea by John Norville. There are a lot of little details that will please those who have been on the Jungle Cruise ride, the plotting is predictable in a way that doesn't make the adventure any less fun, and it's all just a perfectly-crafted, unabashed, blockbuster to enjoy on the big screen.

Director Jaume Collet-Serra is generally known for the films that he has directed in the horror and thriller genres (including House Of Wax, Orphan, and The Shallows), but he feels like a great choice to be helming this material, balancing the fun factor with the dark fantasy elements, particularly when the undead conquistadors take the centre stage. It may remain more of a Disney film than a Collet-Serra film, but that is what tends to happen with every Disney movie.

Aside from Johnson, Blunt, and Whitehall, there's a lot of fun to be had with the over-the-top villainy of Plemons, who seems to be having a ball, the nature-harnessing conquistadors, and Paul Giamatti, playing a character who is owed a debt by Frank Wolff that could lead to him taking ownership of Wolff's boat.

The runtime, just over two hours, fairly flies by, there's a decent musical score from James Newton Howard, and the only thing that drags this down is the feeling of "been there, done that" that permeates many of the major story beats. I'd recommend this as superior family entertainment, easily, but I'd also like to think that it doesn't need any sequels or spin-offs that I assume are already being planned. 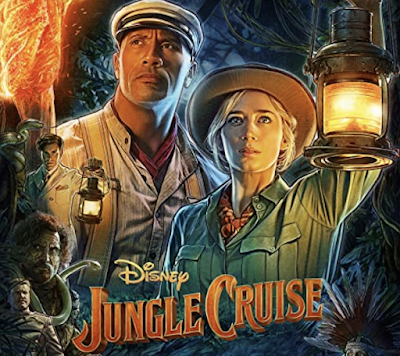