Although I now own some films from director José Ramón Larraz, this was actually my first time watching one of them. It hasn't inspired me with confidence about the rest of his filmography. Edge Of The Axe is a slasher movie that feels even sillier than many other films from the subgenre, and the fact that it was from the later 1980s, as opposed to that first half of the decade that proved to be the "golden period" for the slasher flick, meant that it should have been trying harder to stand out from a very packed field.

The plot is very simple, and laid out by the title. There's a masked killer on the prowl with a big axe. People are disappearing, or turning up in corpse form. But that doesn't matter so much to young Gerald (Barton Faulks), who is enjoying getting to know a young woman named Lillian (Christina Marie Lane). The two enjoy computers, as well as the company of one another, but Lillian soon starts to worry when she finds that Gerald has a database on his computer of all the known murder victims.

Having looked up what others thought of this, I was bemused to see a number of positive takes. Some people think this is a superior little slasher. Fortunately, for the sake of the other Larraz movies that I own and have yet to watch, the director himself apparently considered it his worst feature. Slasher movie fans will find some fun elements to enjoy, particularly with an ending that is as predictable as it is amusing, but it's generally not as inventive or gory as it needs to be.

It's odd that four people are credited with creating this script, which is outright shambolic at times. The most egregious example of the poor writing is shown in the first third of the film, with a scene showing Gerald and his friend, Richard (Page Mosely), discovering the corpse of a murder victim sandwiched in between scenes of them being generally carefree and unbothered by the current situation.

The blank mask isn't too bad, considering how important it can be to give a memorable look to your mystery killer in these things, there are some enjoyable bits of nastiness throughout (including an impressive removal of some digits as someone reaches to grab ammo for their weapon), and the set-pieces generally work well because of the brazen nature of the killer. The first main kill takes place in an automated car wash, and deserves props for being a bit different from many that we've seen before.

The cast vary wildly, in terms of acting quality, but none of them can do much to distract from the weak script. Lane is a more enjoyable lead than Faulks, who suffers from his earliest scenes working to make him the first main potential suspect. Mosely is okay, I guess, but it's the actresses who get to impress more while they are trapped in the more tense sequences. Patty Shepard, Alicia Moro, and May Heatherly all play characters who are stalked by the killer at one point, and all do well enough at being imperilled.

When this first ended, I was massively disappointed. I considered it one of the worst things I'd watched in some time. But it's not. And it's one of those films that retains a certain charm, despite (or because of) the goofiness of it. It's still not good, and I'd rate it as one of the many lesser slasher movies to be released in the 1980s, but it's a film that many horror movie fans will still be able to enjoy, just maybe not in the way that Larraz actually intended. 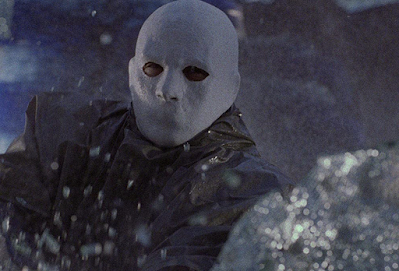