An updated version of Fantastic Voyage, but with some better special effects and a fair amount of comedy added, Innerspace is another film from director Joe Dante made in the middle of a period where he could do no wrong (from the late '70s all the way through to the early '90s) . . . unless you were someone always wanting to see a decent, or indeed any, financial return from his films. Because as beloved as many of them are today, many Joe Dante movies only found a fanbase when they were discovered on VHS. The director himself perhaps views the underwhelming box office performance of this one with particular disappointment, having said that positive test screenings were followed up with a poor marketing campaign that didn't clarify exactly what kind of movie it was. An image of a tiny vehicle, and tiny pilot alongside it, being held between someone's finger and thumb may show the miniaturisation at the heart of the plot, but it doesn't reassure people that they will get a lot of laughs and entertainment.

Dennis Quaid plays Tuck Pendleton, a pilot who has volunteered to take part in a groundbreaking experiment. He will be placed in a small vehicle, miniaturised, and then injected into a bunny rabbit. But there are some villains who want the technology, which leads to some chaos, leading to Tuck actually being injected into the butt of hypochondriac Jack Putter (Martin Short). So now everyone wants the tech that is in Jack, and they’re not too bothered if Jack and Tuck survive the process. Once Tuck figures out where he is, he communicates with Jack and helps him avoid danger, also enlisting the help of Tuck’s on-off girlfriend, Lydia Maxwell (Meg Ryan).

Written by Chip Proser and Jeffrey Boam, Innerspace is a wonderful adventure that makes inventive use of the premise to blend a lot of comedy with many family-friendly thrills. Simply focusing on the voyager inside the human body could have been a showcase for special effects, but may have also become quite dull after the initial excitement died down, so having Tuck able to communicate and help Jack is the masterstroke that elevates this above the film it most closely resembles.

Whether you tend to love or hate the films of Dante, and I fall firmly into the former camp, there’s no denying that he excels at creating films that satisfy a wide audience demographic, with younger viewers impressed by FX work, laughs, and thrills, and older viewers also able to appreciate the many references to the history of cinema, and Loony Tunes cartoons.

The other thing that Dante so often does is cast well, and Innerspace certain benefits from superb casting. Quaid is at his cocky, charming, best as Tuck, and this is one of many fine comedic performances from Martin Short that serve to highlight what a superb actor he is. Ryan is at the start of a run of performances that would mark her out as a female lead that everyone fell in love with for a number of years. Robert Picardo, Kevin McCarthy, and Dick Miller all appear, of course, playing The Cowboy, a main villain, and a taxi driver seen in one scene, respectively, and all are as great as ever, with Picardo having the most fun of the three. Fiona Lewis is also a villain, working in tandem with McCarthy, and Vernon Wells is a menacing “henchman” who could easily be part of any James Bond movie (his fake hand providing one of the more amusingly risqué gags in the film). There are also great little turns from Henry Gibson, Wendy Schaal, and a number of other familiar faces.

Arguably the most straightforward family film from Dante during this period of his career, Innerspace is everything you could want from a polished blockbuster. Lots of fun ideas, a cast of memorable characters, great set-pieces, and an ending that is so enjoyable I end up watching the footage that plays out over the credits every single time. There’s also another great Jerry Goldsmith score, and great use of the song “Twistin’ The Night Away”. The only main issue is the pacing of the first half, which could have been tweaked to get to all the fun stuff a bit quicker.

Sometimes the best things do come in the smallest packages. 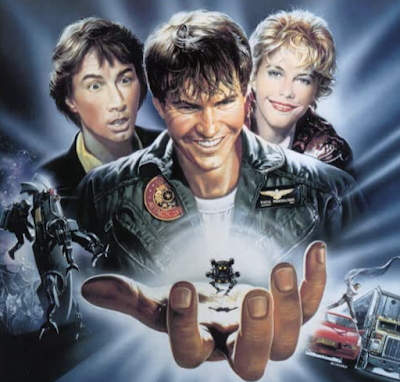