No, this is not a spin-off from The Wizard Of Oz, which could have been a much more interesting movie. Flying Monkeys is a movie that barely needs any further explanation. It's about deadly flying monkeys.

Maika Monroe is unfortunate enough to star in the lead role, playing Joan, a young woman who seems to be consistently disappointed by her father, James (Vincent Ventresca). Things haven't been the same since her mother died. After he arrives late to her graduation ceremony, James tries to make up for his latest error by buying a pet monkey for his daughter. She wants to be a vet so owning a pet monkey should be good practice. Unbeknownst to everyone, however, the monkey isn't actually a normal monkey. It can turn into a dangerous winged creature, and when shot with standard weapons it actually multiplies. The local Sheriff (Michael Papajohn) ends up racing to protect the people in his local community, but the real solution can only be found in the blessed weaponry wielded by a woman named Yin (Boni Yanagisawa).

The only film, to date, directed by Robert Grasmere, Flying Monkeys is almost absolutely awful in every single respect, save for the fact that they got Monroe just before her star-making turns in some great genre movies a year or so later (and when I say star-making . . . I am referring to how she is viewed by fans of those movies who immediately adopted her as a new potential scream queen). This is also the only film to be written by Silvero Gouris, which is a situation I hope doesn't change any time soon. Flying Monkeys could have been a silly distraction, either a simple and fun creature feature or something with a tone to put it firmly in the comedy horror camp. It instead tries to play everything fairly straight, and is all the worse for it.

Where to begin? I started to think that the people involved with this didn't really know what they were doing when they decided to have an elderly character deliver a line of dialogue most famously spoken by Matthew McConaughey in Dazed & Confused. It shows that this was written by someone more interested in fitting in a small reference than creating some convincing characters to be caught up in the winged primate peril. Having said that, at least it is one memorable line. It just happens to be lifted from a much better movie.

Monroe remains likeable enough in the lead role, and Ventresca isn't terrible as the father who cannot do right for doing wrong, but there aren't many others who help to make the material more bearable. Yanagisawa is particularly poor, I'm sorry to say, but Papajohn isn't very good either, and their performance levels are equalled by Electra Avellan, Tyler Forrest, Zac Waggener, and others. Christopher Matthew Cook, billed as Matt Cook, manages to do well enough, playing the unscrupulous animal trader who unwittingly sells the killer beast to Ventresca's character.

You could say that this is on a par with so many other movies of this type. It's not though. I've watched, and enjoyed, many other films like this. I've accepted the varying quality of the acting, I've had fun with the terrible CGI, and I've known that they were a packaged product that I chose to consume. Flying Monkeys lacks a sense of fun, or some kind of self-awareness. Which means that none of the moments feel as enjoyable and entertaining as they should, even the main "punchline" delivered by Monroe, a line that should have been celebrated for how wonderful and terrible it is, but just ends up making you roll your eyes and groan instead.

Or maybe I am just annoyed that there still hasn't been a killer monkey movie titled The Apes Of Wrath. 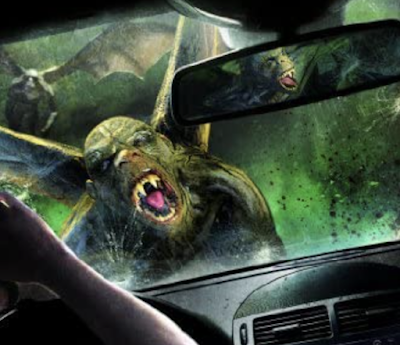