Pretty much everyone returns for this enjoyable sequel to the 1999 supernatural adventure flick, and that's a large part of the appeal. Introducing a character named the Scorpion King (played by Dwayne Johnson, still being billed as The Rock at this point), it may suffer from trying to stir in a few too many new ingredients, but it certainly tries to keep the focus on simple entertainment throughout.

We start with a prologue that explains the origin of the Scorpion King and his army, then it's time to join the O'Connell family as they explore more ancient ruins. Rick (Brendan Fraser) and Evelyn (Rachel Weisz) now have a curious young son, Alex (Freddie Boath), with them. They find the Bracelet of Anubis, which locks on to the arm of young Alex when he tries it on. The bracelet shows him a vision of the modern location of the Scorpion King, where an oasis and pyramid now stand, and that means Alex is then of great interest to people once again trying to resurrect Imhotep (Arnold Vosloo). This includes his love, Meela AKA Anck-su-namun (Patricia Velasquez). Alex is kidnapped, the O'Connells end up in hot pursuit, and someone will probably end up fighting the Scorpion King, otherwise that whole prologue would seem a bit pointless.

It's Stephen Sommers once again taking on the writing and directing duties here, and he has a lot of fun with many of the action set-pieces. The Mummy Returns may be many things, but it's never dull. It is, however, just not able to recapture quite the perfect mix of fun and spookiness that the first film had. This is partly to do with the "let's throw more of everything in and that should be great" approach, and partly to do with the fact that the CGI on display here feels even worse than the CGI in the preceding film. Sommers clearly thought computers were already at a stage where they could create anything onscreen that he could envision. They weren't. The actual Scorpion King himself remains a real eye-sore, and comes along after an extended encounter with some fierce, undead, pygmy creatures that feels like a decent idea executed terribly (scaling back what viewers could actually see, and using some puppetry, would have made that sequence much more effective).

Fraser and Weisz continue to work really well together, and Weisz also gets to do a lot more fighting this time around (as well as take part in some poor flashback scenes that show her in a previous life). Young Boath does well enough, cocky enough until he is reminded of the fact that he is often in the company of adults who wouldn't think twice about actually causing him harm. Vosloo and Velasquez both do solid work, and The Rock makes a good impression before he's replaced by a 32-bit videogame representation of his character. John Hannah is also back, and still a lot of fun, as is Oded Fehr, and you get fun supporting roles for Alun Armstrong and Adewale Akinnuoye-Agbaje, playing villains, and Shaun Parkes, as someone who might be able to help the O'Connells.

Although it's more of a mess, in terms of both the attempt to bulk out the thin plot and the CGI, The Mummy Returns still offers up enough solid popcorn pleasure to be a worthy successor to the first film. A lot of that is down to the cast, but the familiarity, while not necessarily breeding contempt, works against it as much as it works for it. Many people, myself included, will always have a soft spot for it though. 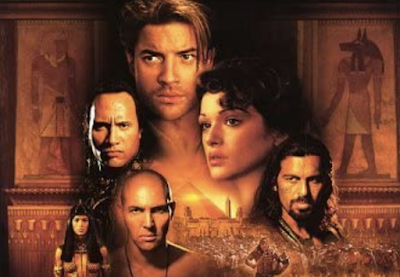